Market research agency, TrendForce, recently released a report on the performance of IC design companies. The research looks at the second quarter of 2020. The report shows the world’s top ten IC design companies in 2020. In terms of rankings, Broadcom, Qualcomm, and Nvidia occupy the top three positions. Taiwanese chip maker, MediaTek ranks fourth while AMD is in the fifth position. As for Huawei HiSilicon, it is missing from the top ten list. 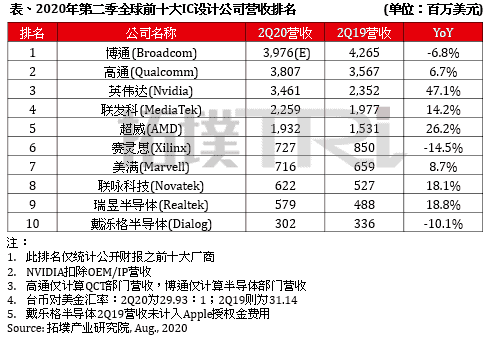 According to the report, Qualcomm continues to benefit from 5G products, remote work, and teaching needs. However, the postponing of Apple’s new-generation iPhone resulted in limited revenue growth momentum in the second quarter. This in turn allowed Broadcom to grab the quarter’s revenue and claim the top position.

An analyst at Tuo Dai said that Huawei’s HiSilicon is affected by the continuous upgrade of the US Department of Commerce’s ban. Furthermore, the chip self-sufficiency of Huawei’s product lines is also performing badly.

Huawei HiSilicon can not grow with the U.S. ban

As the tensions in the Sino-US relations continue to increase, HiSilicon will continue to face a ban. To this end, the HiSilicon flagship processor in Q2 2020 should be its last mobile phone processor for now. Other types of chips such as server processors, AI, and 5G chips may also face the same situation.

Taiwanese IC design companies MediaTek and Realtek are performing well, with annual growth rates of 14.2% and 18.8% respectively. Among them, MediaTek successfully deployed the 5G mid-range smartphone chips with the strategy of optimizing the 7nm process. The Taiwanese manufacturer has a low-cost structure as usual and did boost its revenue and gross margin.

According to previous news, Kirin 9000 will use TSMC’s 5nm process. In view of the fact that TSMC will no longer be able to ship to Huawei after September 15, the company is now at full capacity to produce for Huawei.

In terms of U.S.-based IC designers, only AMD and Xilinx maintained revenue growths. Owing mostly to Intel’s inability to effectively address its supply shortage, AMD notched excellent performances in terms of Q3 2019 and Q4 2019 revenue, which resulted in consistent growth in the overall 2019 revenue. Xilinx, as the other U.S.-based company undergoing revenue growth, excelled in 5G, industrial automation, and automotive applications. Although the Entity List’s implementation began affecting Xilinx in Q4 2019, the company was able to grow its revenue by 12% YoY.