Over the years, Chinese manufacturer, OnePlus, has positioned itself as a flagship brand. However, as the market situation is changing, every successful brand will modify its business with the times. The coronavirus pandemic affected the smartphone market. Customers do not spend as much money on smartphones as they used to. To this end, OnePlus released its first-ever mid-range phone, OnePlus Nord a few weeks ago. After the official launch of OnePlus Nord, there were speculations that the company is working on more non-flagship phones. These past few weeks, we have seen the likes of OnePlus Clover, OnePlus Billie, OnePlus Kebab, and most recently OnePlus Lemonade. 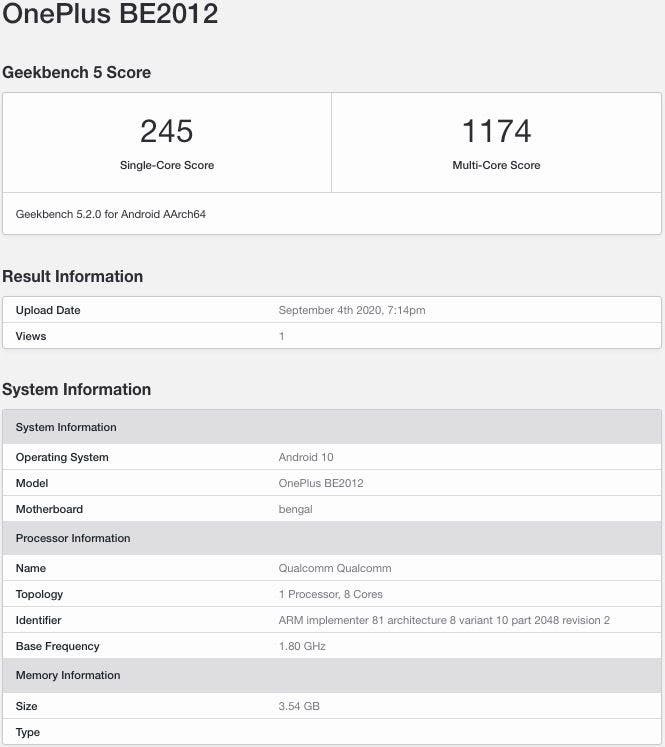 While Kebab refers to the OnePlus 8T, Billie is a mid-range device with Snapdragon 690 chip. As for OnePlus Clover, it will be the company’s first-ever entry-level smartphone. Now, the OnePlus Clover has been listed on GeekBench and some of its specs are also shown.

Looking at the GeekBenck listing, the OnePlus Clover will use a Qualcomm Snapdragon 460 chip. The unit on the GeekBench database comes with model number “OnePlus BE2012” as well as 4GB of RAM. There is no information if this smartphone will have more RAM capacity. The phone runs an 8-core CPU which clocks at 1.80GHz. The OnePlus device scores 245 points in the single-core test while its multi-core test has 1174 points.

According to reports, the OnePlus Clover will the company’s first-ever entry-level smartphone. This device will come with a 6.52-inch HD+ screen and will be powered by an SD460 chip. It will also have 4GB of RAM as well as 64GB of internal storage. In the camera department, there will be a triple rear camera setup. The main sensor will be a 13MP shooter which will be supported by two 2MP sensors. There is also a 6000 mAh battery with 18W fast charging support. Furthermore, this smartphone will come with a rear fingerprint scanner and a headphone jack. As for the price, there are reports that the OnePlus clover will sell for about $200.

According to reports, OnePlus Clover will be for the entry-level market. There are also reports that the OnePlus Billie, OnePlus Kebab, and OnePlus Lemonade are not flagship devices. This suggests that OnePlus is really throwing its weight behind the non-flagship segment. However, the mid-range and entry-level markets have stiffer competition. OnePlus will have to prove itself to potential buyers.