There have been many months of speculations regarding the specs, price, and details of Microsoft’s upcoming consoles. Some months ago, Microsoft officially confirmed the hardware specs of the Xbox Series X. However, we still do not know much of the Serie S. Now, the company has officially confirmed the price of the Xbox Series S. We can now lay all the price rumors regarding this console to rest. Today, in a tweet, Microsoft said “Let’s make it official! Xbox Series S | Next-gen performance in the smallest Xbox ever. $299 (ERP)”. 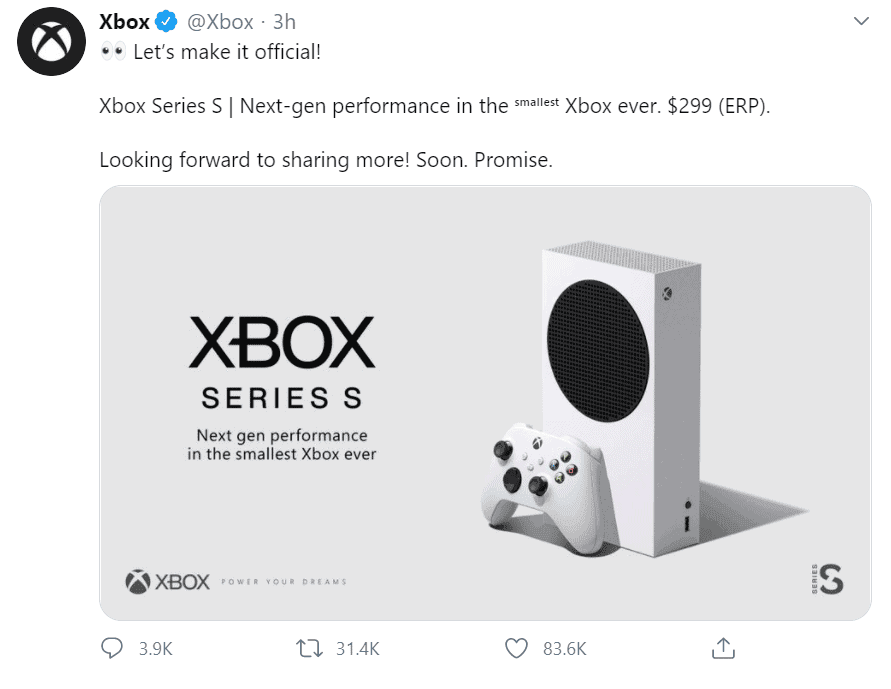 This confirms that the retail price of this device is $299. It also confirms that most of the speculations were correct. Looking at the image with the post, the Xbox Series S adopts a white colour with a black circular mesh grille on the wider side. This mesh feels like an allowance for proper heat dissipation. There are also a large number of honeycomb openings on the top. Some netizens say they are like desktop speakers while others say they are like radios. On the narrow side, you can see the USB Type-A interface and Xbox Logo but not the optical drive.

In terms of performance, the Xbox Series S is expected to reach 4TF performance, with a target of 1080P games. Although this number is lower than the Xbox One X, thanks to the RDNA architecture, the actual game performance is above the X1X. However, the Xbox Series X will reach 12TF. The Series S will probably become the cheapest next-generation Xbox, an entry-level host. It will come with a greatly improved NVME SSD storage speed while keeping the price favorable. According to speculations, “Lockhart” uses Zen + Navi architecture.

Furthermore, some reports believe that the 4GHz Ryzen APU may appear on the Series S. It uses 16GB of RAM, 12GB of which is allocated to the graphics card, and 4GB to the OS layer.

According to speculations, both the Microsoft Xbox Series X and Series S will hit the market simultaneously. There are reports that these consoles will commence sales on November 10th. In addition to the original price, you can also participate in Xbox All Access for a monthly payment.

As usual, there are conflicting views regarding the price of the Xbox Series X. While some believe that it is a good deal, others say that it does not offer enough for its price.

Next Bombshell POCO X3 NFC cheaper with our coupons