This year certainly is being rough for most smartphone makers, especially for those that failed to deliver in the past few years. One of the best examples that come to my mind when I think about companies that lost grip in recent years is LG. The company once was one of the most relevant companies pushing flagship devices but failed to keep up with the competition. This year, LG, decided to make drastic adjustments on its smartphone business and it started with the death of the LG G series. Instead, the company unveiled the LG Velvet 5G, a premium mid-range smartphone with modern design, and 5G-ready Snapdragon 765G. We already got multiple variants of this particular device, the most recent one with MediaTek’s Dimensity 1000C which also brings 5G connectivity. However, we were still missing a “jaw-dropping” device from LG to draw some attention. While most companies are busy with the development of foldable smartphones, LG decided to go through a separate route. First, the company started with the release of special cases that bought a “dual-display” experience to some of its flagships. It was a nice accessory that really added some nice usability. The best is that if you get sick of having a dual-display phone you can simply detach the accessory. Now, the company is giving a step further with the release of the “jaw-dropping” device that we’ve been talking about – The LG Wing.

The new phone quite innovates the segment of dual-display devices with a swiveling panel. Moreover, it’s a gorgeous phone with a nice design. The unconventional design does not bring compromises to the phone’s design. Without further ado, let’s dive into the phone’s specifications.

The LG Wing is the fruit of the company’s Explorer Project. This is an initiative that is working hard to introduce new concepts for smartphone design. It will take risks always than necessary to bring innovation to the market. The new LG Wing is just the start, and we’re excited about what is about to come. Besides the new device, the South-Korean firm announced that it will partner with several companies including Qualcomm, Naver, and streaming platforms Tubi and Ficto to take advantage of its new designs.

Under the hood, the LG Wing packs a Snapdragon 765G paired with 8GB of RAM and up to 256GB of Storage. If you’ve been expecting flagship performance, then you’ll be displeased with the choice of the SD765G. However, we can understand that LG’s choice is related to the final price of the device.

The handset ships with a huge curved 6.8-inch P-OLED display with FHD+ resolution and 20.5:9 aspect ration. The secondary screen is a 3.9-inch G-OLED that despite its size also brings FHD+ resolution in a very unconventional 1.15:1 aspect ration. The handset comes with an IP-54 rating and the display ships with a water repellent coating. The primary display is gorgeous and quite bezel-less, thanks to a 32MP pop-up camera solution. It also comes with an in-display fingerprint scanner.

The icing on the cake of this smartphone is on the swiveling display. You can use it as a big 2020 smartphone without any problem, but if you want to expand its usability you can swive the main screen horizontally. With the swiveling mechanism, you will get a unique form factor and LG has showcased some of the use-cases for this handset. The highlights certainly are on media consumption, but it can also greatly expand the multi-tasking experience. 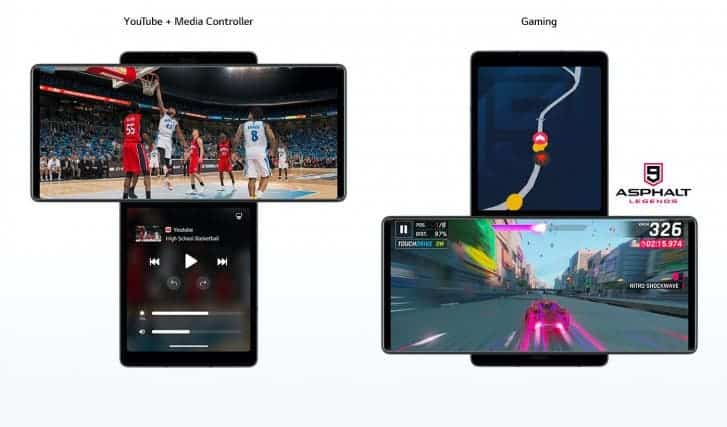 The second display can show you notifications, improve your gaming experience, show GPS navigation, and more. The phone comes with some native usability scenarios. However, the list of use-case scenarios will grow in the coming months as more developers add support for this secondary panel. In case you’re wondering about the endurance of this mechanism, LG ensures that is can last 200,000 swivels and it features a dual lock mechanism and hydraulic damper to absorb shock. The second display also acts as a gimbal with a virtual joystick for the main camera.

This certainly is an unconventional phone, but it’s not bulky, LG did a good job with dimensions that are close to regular smartphones 169.5 x 74.5 x 10.9 mm. The device is thicker than the big majority, but we can understand that the extra display adds a lot to this math. 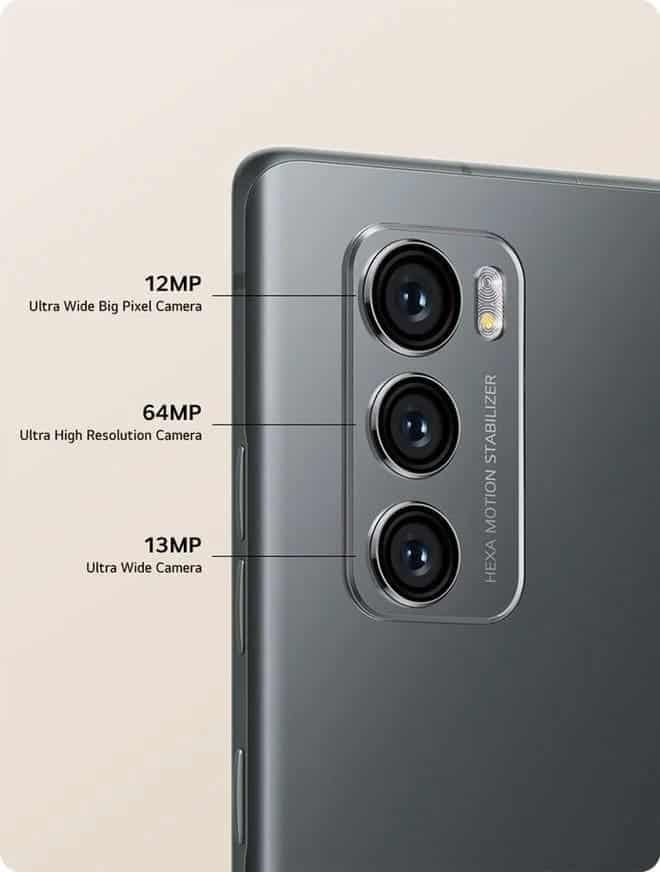 Moving around to the rear we have a traditional design with a Square-ish triple camera sensor. It comprises a 64MP primary camera, 12MP ultra-wide shooter for the swivel mode, and another 13MP ultra-wide. Last but not least, we have Android 10 in tow with LG UX running atop. The device draws power from a 4,000mAh battery with wireless charging support.

At the time of this writing (via), LG is yet to reveal the actual price of the device. However, it will reach South-Korea in the next month. The company also revealed that it will be sold in Europe and the United States (coming to Verizon first).