There have been numerous speculations regarding the upcoming OnePlus 8T. All these speculations will be put to rest later this month. However, smartphones are not the only gadget that OnePlus makes. In a new teaser, OnePlus revealed that a new device is on its way. The information on its official Twitter handle shows that this device is associated with sound. Furthermore, the teaser shows a part of an earbud. This suggests that OnePlus will probably release an earbud soon. 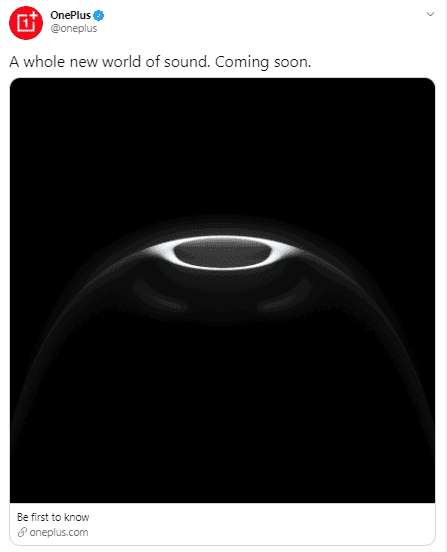 In addition, the link on the Twitter post directs users to the OnePlus 8T launch event page. This implies that the OnePlus 8T will not be alone on October 14th. It will probably arrive with the new earbud. The tweet comes with the phrase “A whole new world of sound. Coming soon”. Of course, may believe that this earbud will be flagship level.

According to speculations, OnePlus has other devices in line to arrive on October 14th with the OnePlus 8T. However, the OnePlus 8T will obviously be the protagonist of the event. For now, rumors have it that OnePlus will release at least five products on October 14th. At least, we expect a new earbud as well as a power bank with fast charging capacity.

Enthusiasts have reasons to believe that the Buds Z will be cheaper than other available models. Of course, the OnePlus Bullets is more expensive than the OnePlus Bullets Wireless Z. Unfortunately, OnePlus has been quiet regarding what the Bud Z will offer. Its latest teaser di not say much either.

However, we can expect this device to support Dolby Atmos for OnePlus’s latest flagships. Noise cancellation and some sort of waterproof rating are other features that we expect from this device.

Next How to keep your smartphone battery safe - If you are doing these, you are killing your battery