The Xiaomi Mi 10T and Xiaomi Mi 10T Pro were released outside China on September 30. However, these smartphones are now on their way to the Chinese market. Earlier today, a new Xiaomi model, M2007J3SC, got the Chinese 3C certification. According to popular Weibo blogger, DigitalChatStation, this model is part of the Redmi K30 series which corresponds to the Xiaomi Mi 10T series. 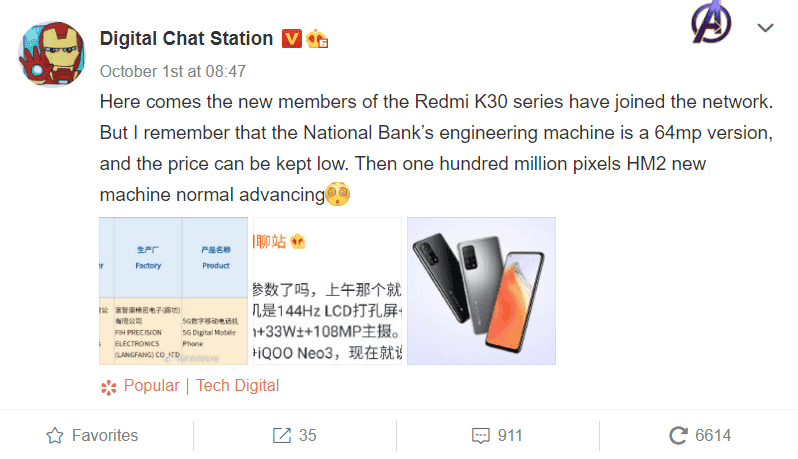 This smartphone will come with a Qualcomm Snapdragon 865 flagship processor. This will be the third device with this processor in the Redmi K30 series. The first two are Redmi K30 Pro and Redmi K30 Pro zoom version.

Furthermore, the certification shows that this Redmi model will have two versions. The standard version will come with a 64MP main camera, much like the Xiaomi Mi 10T. However, the high model will use a 108MP main camera (supporting OIS optical image stabilization), which corresponds to the Xiaomi 10T Pro.

In addition, this new Redmi machine also inherits other excellent features of the Xiaomi 10T series. It will have a 144Hz LCD high refresh screen, 5000 mAh large capacity battery, and so on. As for the price, taking into account Redmi’s positioning of the ultimate price-performance ratio, the starting price of the machine is expected to be between 2000 yuan ($295) – 3000 yuan ($442).

As of now, there is no official confirmation of the speck of the new Redmi phone. However, it will be lovely to see some addition to the already existing corresponding models. Also, there is no information on the launch date for now. Since the certifications are already rolling, we expect this device to arrive in the coming months.

For many people, rebranding is quite annoying. It is not enough to just simply re-produce a pre-existing phone and give it another name for a different market. Xiaomi loves this strategy and it seems to be working well for the company. If you look through Xiaomi’s collections (including Redmi and Poco), you will find many rebrands. This has made the naming of Xiaomi’s device quite complex and bulky. The Redmi K30 series already has about five smartphones, and the company is adding more. This is because the devices it is producing do not have enough improvement to start a new series.  As of now, netizens want to move over to the Redmi K40 series.

Previous iOS 14 interface changes are inconsistent and not well organized

Next Huawei Mate 40 Series Preview: Everything We Know At The Moment