Samsung might be one of the only Android smartphone company that offers a fully-fledged ecosystem. Apart from phones and tablets, the device also focusses a lot on its wearable segment that includes smartwatches and truly wireless earbuds. At the time of writing this, the chaebol has three different earbuds in its portfolio. We’re looking at Galaxy Buds, Galaxy Buds Plus, and Galaxy Buds Live from which the latter was unveiled recently.

The Galaxy Buds Live has indeed become the current best offering from the company that comes in a unique bean-shape design. With the new design, Samsung aims to offer immense comfort allowing users to use the wearable for solid long hours. It looks like the company has managed to attain that goal. After the success of Buds Live, it looks like Samsung is now working on next-gen TWS earbuds.

According to a recently filed trademark from the brand, the next-gen earbuds might go by the name of Galaxy Buds Sound. The new trademark was filed by the brand with the UK Intellectual Property Office. For those who’re unaware, the trademark allows the company to secure the moniker. This means that only the company that filed the trademark will be able to use it. 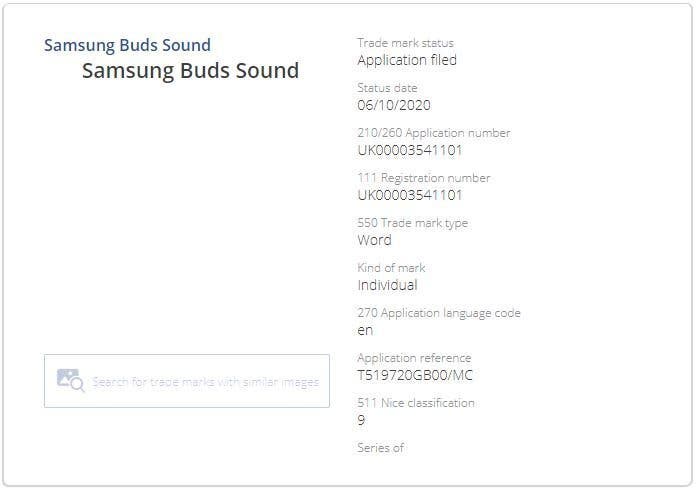 As per the listing, the trademark is categorized under Class 9 of goods. Again, if you’re unaware, this class contains a lot of products. We’re looking at products such as VR headsets, TVs, Printers, and Wireless headphones. Although the Class 9 is quite diverse, it is safe to assume Galaxy Bounds Sound would be next-gen TWS earbuds. The Galaxy Buds are the company’s official moniker for all its truly wireless earbuds.

With that said, it is worth noting that filing for a trademark doesn’t clearly mean that the product will see its debut. For such speculations, we definitely need more concrete information surrounding the Galaxy Buds Sound. Considering the company’s previous records, we might see a product named Galaxy Buds Sound. To recall, Galaxy Buds Live was trademarked by the codename Bean. Soon after, the wearable went official back in August.

what about ‘under sun rays’ problem?

Soon after the launch of Buds Live, we started witnessing reports of ‘under sun rays’ problem on the wearable. It looks like the Buds Live and Buds Plus users started facing this weird problem when using wearable in warmer conditions. The usage in such conditions makes the TWS beep infinitely until you take them off and make them cool down. Hopefully, we should not see such problems with the next-gen TWS.

Next MediaTek MT9602 SoC Announced: Motorola Will Release New TVs With It Tomorrow