Huawei is still trying to manage its current situation in the smartphone market. The company has never been this careful when it comes to unveiling its new devices. However, with the Huawei Mate 40 series and Kirin 9000, Huawei is taking its time. In about a week, the Chinese manufacturer will eventually release these devices. However, a couple of listings from GeekBench and Antutu have given us a glimpse of what to exp0ect from this chip.

From what we see on AnTuTu, the Kirin 9000 will come with a Mali-G78 GPU but the exact cores remain under wraps. This graphics chip scores over 287,000 points which is quite impressive. This score is well over the 258,171 of the Mi Note 10 Ultra (Snapdragon 865+) which is the highest in the Android camp presently. However, this chip is still a few points below the upcoming Exynos 1080 score.

However, with the Huawei Mate 40 series arriving next week, Kirin 9000 will have an advantage. Samsung’s Exynos 1080  will not arrive at the market until next year at the earliest. According to IceUniverse, the Exynos 1080 launch will be dependent on the Vivo X60. It appears that the Vivo phone will be the first to use this chip.

As for the Huawei phone on GeekBench’s listing, the model number is NOH-NX9. This smartphone comes with a 90Hz display and runs Android 10 (with EMUI) on 8GB of LPDDR5 RAM and 256 GB of UFS 3.1 storage. This device is most likely in the Mate 40 series but we can say which model it is exactly. 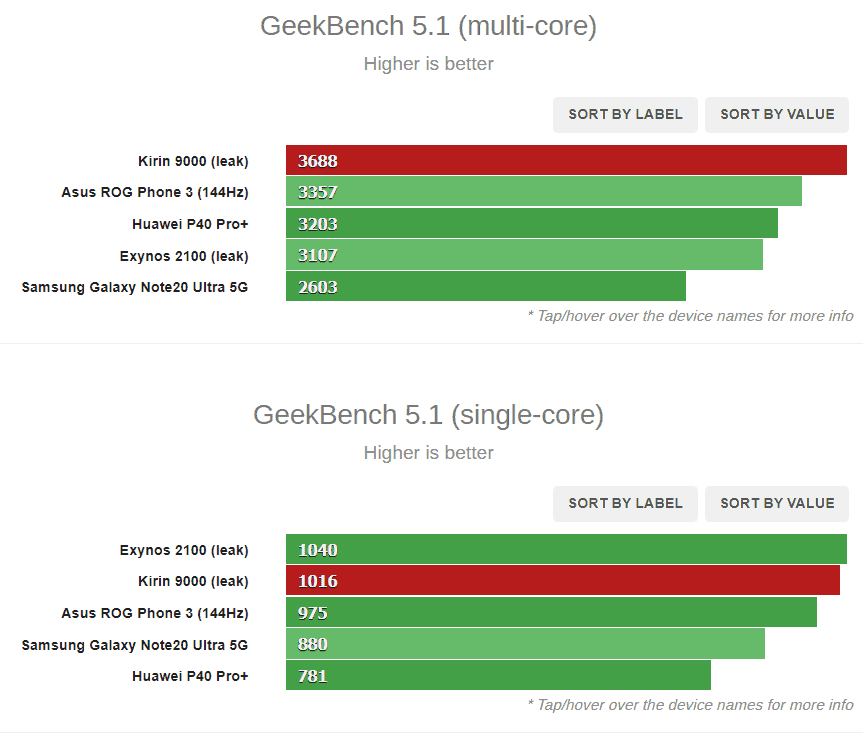 Looking at the processor of this device ARM has since revealed that the large Cortex-A77 cores clock 3.13 GHz. The current highest score in the Android camp is Snapdragon 865+ and it hits 3.09 GHz at its prime. Of course, we know that the 5nm process of the former will obviously improve its clock speed. Although the A77 is an older generation, it was used in some 2020 chipsets. Nevertheless, it is still better than what the Kirin 990 5G offers. It delivers a 20% higher clock speed over its predecessor, A76 cores.

Unfortunately, due to the U.S. ban, we will not see enough of the Kirin 9000 SoC. According to reports, TSMC was not able to deliver the 15 million units order that Huawei Placed. Because of time constraints, the Taiwanese chipmaker was only able to deliver 8.8 million units. Huawei will now have to manage these on the Mate 40 series and other devices.