Xiaomi has been releasing a lot of smartphones under its different brands for different markets. However, some of these smartphones are simply a rebranding of pre-existing devices. This year has been very productive for its Poco sub-brand but the company still has a lot to do this year. According to PocoGlobal Product Marketing Manager and Global Spokesperson, the company has some devices for us. According to a recent report, a new Poco phone now has the Euroasian Economic Commission certification. 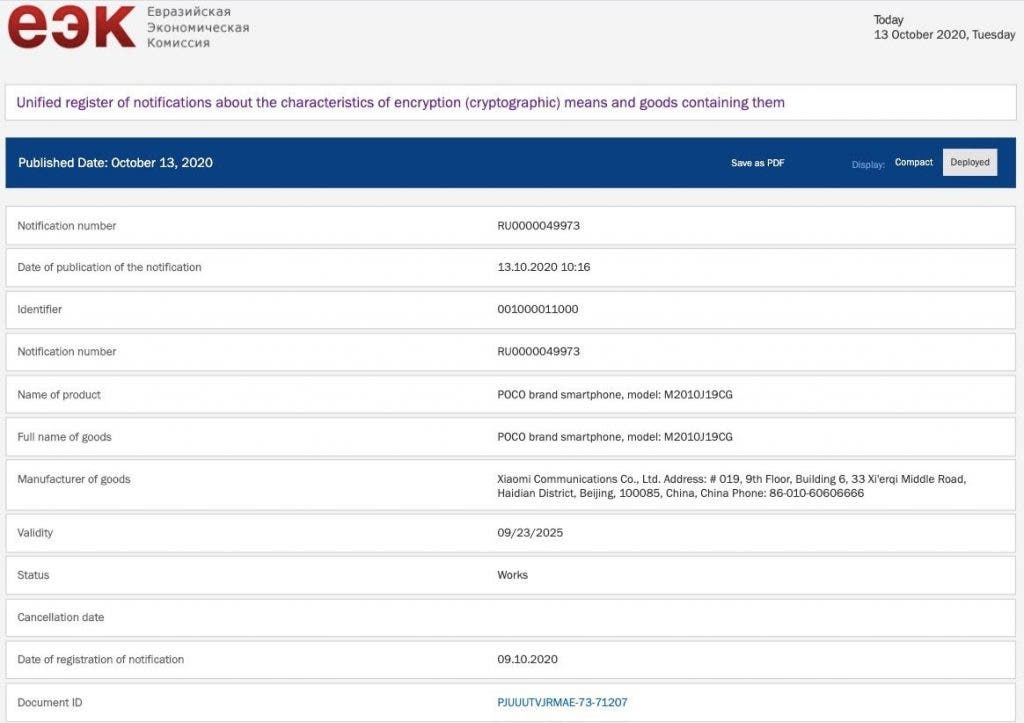 This smartphone comes with model number M2010J19SC and it is completely new. At least, netizens will be happy that they will get to see something new from Poco. However, there are still speculations that this could be a pre-existing Xiaomi device.

There are reports that the model number seems similar to a pre-existing Xiaomi device. According to speculations, this could be the upcoming Redmi Note 10. It is inevitable to have similar devices between Xiaomi brands. This is because they all use the same factories and supply chains.

Poco will continue to use the rebranding strategy – Poco Executive

A number of Poco models are just a rebranding of Redmi devices. In one of its interviews, Poco’s regional director, Anuj Sharma has an explanation for why the company is taking this path.

According to him, at the moment Poco is still a young brand and the development of new devices for each series is not an easy task. This is why they have to Redmi models as a base or platform, improvising with them. Well, this practice is not entirely new to the smartphone market. OnePlus One was more of an Oppo product than OnePlus. The same thing can be said of many Realme smartphones. This strategy is by no means a novelty, he says, and Poco is by no means alone.

Furthermore, Anuj Sharma believes that the company will follow the rebranding strategy in the future. This means that we will still see Poco models based on Xiaomi smartphones. He also confirmed that they will continue to install the MIUI shell on their devices because the creation of their own firmware is not included in their plans for the foreseeable future.

With this admission from a Poco executive, it is most unlikely that the upcoming Poco phone is a “new” device. It is probably a rebrand of the Redmi Note 10 series according to speculations.

Next Xiaomi mocks Apple after announcing the iPhone 12