Huawei is doing a lot to try and salvage its smartphone business. The numerous ban on the company has an adverse effect on its operations. However, Huawei is not giving up just yet. The company is set to launch its latest flagship, Huawei Mate 40 series. There are reports that at least six products will debut at the Mate 40 conference. In addition, Huawei also sees business opportunities in the software segment. According to a recent report out of China, the company recently released a new speed measurement software. The “One-click Speed ​​Test” App provides network speed measurement, router speed measurement, and other functions. 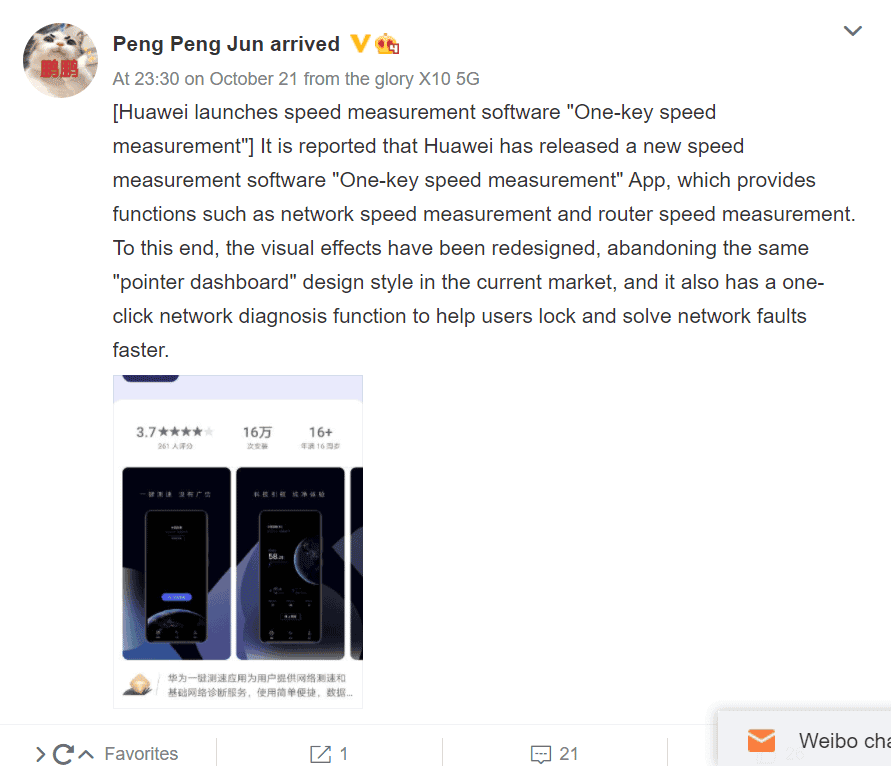 This new app from Huawei comes with a new visual effect. It abandons the regular “pointer and dashboard” design style currently on the market. Furthermore, the app has a one-click network diagnosis function to help users lock and resolve network faults faster.

Looking at the screenshots and information from Huawei claims that the app has no ads. It offers a clean and pure experience. It also optimizes the speed measurement algorithm, and adds cloud test service nodes.

In other news, there are reports that Huawei’s 5G has been banned in Sweden. This country is the home nation of one of the major competitors (Ericsson) in the global 5G network. The European country did not only ban Huawei, it also bans ZTE from its 5G construction. According to the Swedish regulating agency, the ban will be official before the spectrum auction scheduled for next month.

Under pressure from the United States, European governments have been evaluating the role of Chinese companies in building next-generation networks. In July of this year, the UK banned Huawei from its 5G network. It hopes to completely eliminate Huawei from its system by 2027.

South Korea will not ban Huawei

Also, South Korea has said that it will not ban a particular company. According to South Korean media reports, a South Korean diplomat revealed that in the fifth South Korea-U.S. strategic economic dialogue held on October 14, the U.S. side reiterated the U.S. Secretary of State Mike Pompeo’s proposed “clean network” plan, in the name of national security risks, to pressure South Korea to stop using Huawei and other Chinese technology companies’ 5G equipment.

However, the South Korean official responded by saying that the choice of equipment and technology used by telecom operators is the company’s own and that the South Korean government will not interfere with the decisions of private companies.