Oppo is going to launch its another 5G supported smartphone in China on November 4, 2020. Oppo K7x is already in the stories due to several leaks and rumors over the past some time. The company confirmed the launch date of Oppo K7x via its official Weibo handle.  According to the image teaser on Weibo, the phone has a rectangular camera module on the rear side of the phone. 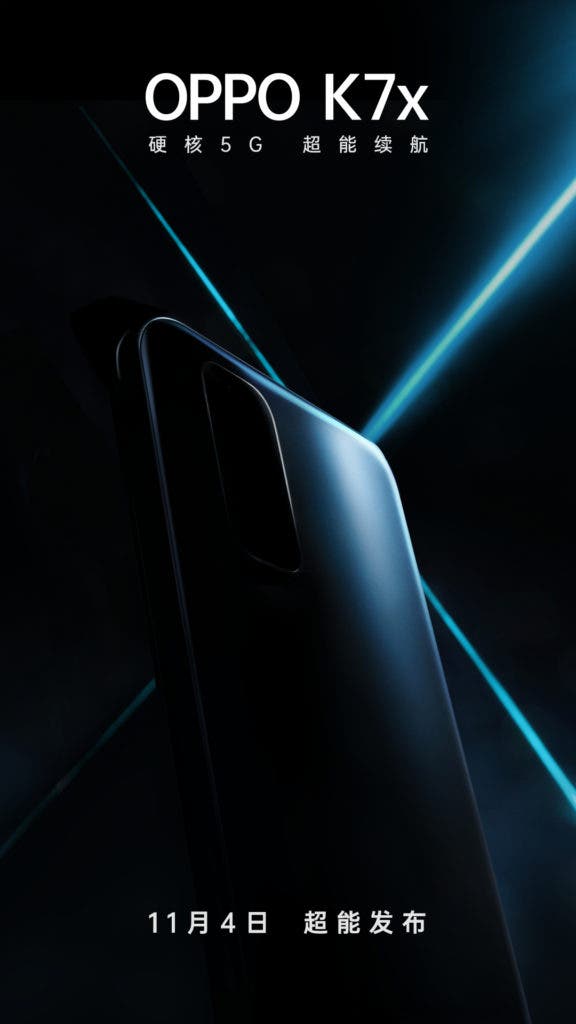 The phone was recently listed on TENAA with photos and key specifications. According to the photos, Oppo K7x back looks familiar to the image teaser posted on Weibo. The phone has round corners across all sides. The volume rockers along with the SIM card module are placed on the left side. However, there’s a power + fingerprint scanner button on the right side.

Moreover, Oppo K7x features a 6.5-inch Full HD+ LCD panel with a 1080 x 2400 pixel resolution. It can provide a smooth gaming experience with its 90 Hz refresh rate display. Oppo’s new phone takes its power from an octa-core MediaTek Dimesity 720 SoC having 5G support.  A 5000 mAh battery with fast charging support is present on the phone.

According to previous leaks and rumors, Oppo K7x will come with a quad-camera setup at the back consisting of a 48MP primary camera with f/1.8, 8MP ultrawide camera, 2MP camera, and one more 2MP camera. For selfies, the phone has a 16MP wide-angle camera. It will be 9.1 mm thick and weigh 194 grams.

Oppo K7 – the smartphone’s predecessor was silently launched back in August in China. It features a 6.4-inch full HD+ AMOLED panel. There’s a quad-camera setup at the back with a 48MP primary camera, an 8MP ultrawide camera, a 2MP macro, and a 2MP depth sensor. A 32MP wide-angle camera is present inside the waterdrop display for quality selfies.