Xiaomi has a very large ecosystem and it released all sorts of devices. The Xiaomi TV box ecosystem is quite large. Over the past three years, it has released a plethora of TV boxes and it is still releasing more. Yesterday, the company officially released its latest Xiaomi Mi Box 4S Pro. This device comes with a lot of upgrades relative to the previous generation. 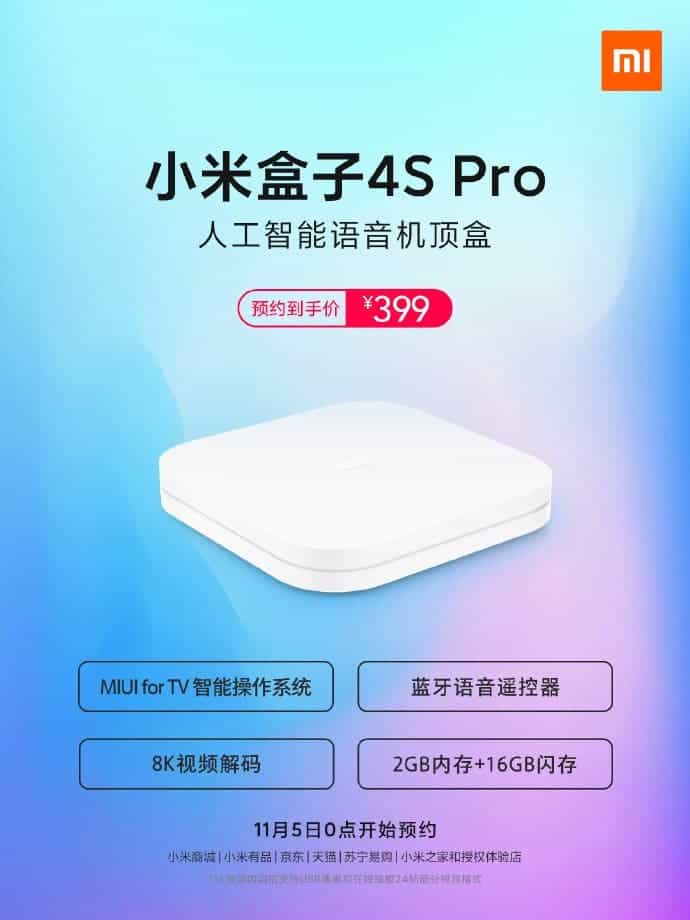 Xiaomi TV boxes are quite cheap and there are one of the most available in the market. Within a few months, the Xiaomi Mi Box 4S and Box 4S Pro are now on the market. The main selling point of this TV box is obviously its 8K video playback support.

In addition to the HDMI interface and storage upgrades, this device also comes with 3GB of RAM and Bluetooth voice controls. Like we all would expect, the Mi Box 4S Pro comes with MIUI for TV platform. This is the norm for most Xiaomi TV products in China. We can also confirm that this device supports mobile phone screen projection. Unfortunately, there is no other information on the specs of this device. However, we expect it to arrive with a USB port.

For those who are already looking at this device and hope to make the purchase, it is not expensive. You will have to part with 399 yuan (~$60) to own this device. The pre-orders of this device in China will commence today. Looking at the price tag, this device is a little more expensive than its predecessor, Mi Box 4S which costs ~$43. The extra cost is worth it anyway. Remember that the Mi Box 4S comes with 8GB of storage and 4K playback.

As for its availability outside China, there is no word on this for now. We hope that Xiaomi will probably replace the MIUI for TV with the standard Android TV if it leaves the shores of China.