Next year, we will see the preponderance of smartphones with the latest flagship chips. These processors will use the latest 5nm process which makes them stronger, faster, and better. Of course, we are talking about Snapdragon 875, Kirin 9000, & Exynos 2100. These processors are from Qualcomm, Huawei, and Samsung respectively. While Qualcomm and Huawei use TSMC’s 5nm process, Samsung has its internal 5nm process technology. In fact, Samsung is the only phone maker that can design and manufacture smartphone chips. The likes of Huawei and Qualcomm (not a smartphone maker) only design chips, they do not manufacture these chips. 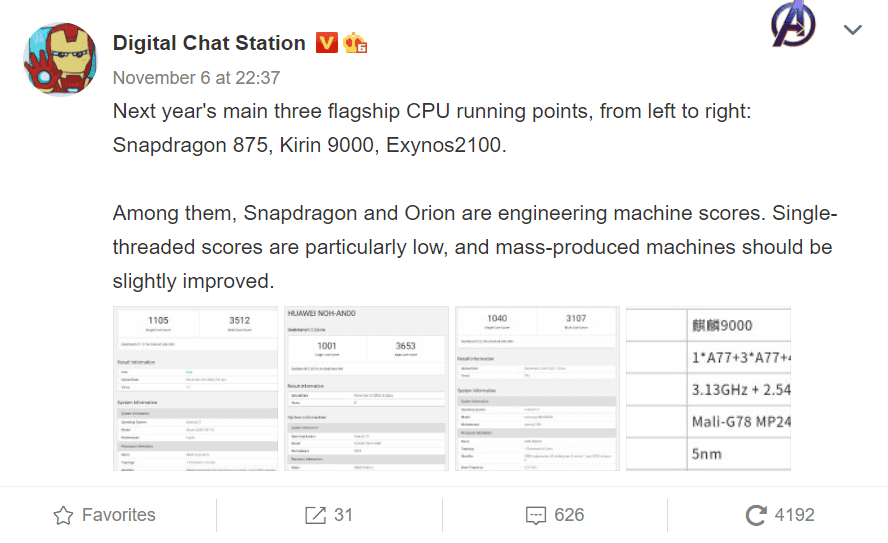 Now, we have the first performance running scores for these three chips. Among these chips, only the Kirin 9000 from Huawei is official. The Snapdragon 875 and Exynos 2100 will arrive in the coming weeks. This means that only the Kirin 9000 running scores is official. The Sd875 and Exynos2100 scores are from engineering models. Before we list out the result, it is important to note something about engineering models. The running scores of engineering models can be significantly different from the final version. In many cases, there will be improvements in the final version. However, it is very possible for the company to water things down to avoid certain problems like overheating and so on.

Looking at the single-core test, the Snapdragon 875 leads with 1105 points. The Exynos 2100 is second with 1140 points while the Kirin 9000 grams 1001 points. However, there are reports that the SD875 and Exynos 2100 are too low. Speculations are that the company will improve on the single-core score in the final version.

Any winner yet? No

The CPU performance of Snapdragon 875 has some advantages over Kirin 9000 due to its architectural advantages, it is leading 15% respectively. However, in terms of GPU, Kirin 9000, with its 24-core Mali-G78’s full-level performance, actually beats the Snapdragon 875 and has the potential to turn over. Apple (Bionic), Huawei (Kirin), and Qualcomm (Snapdragon) have all used TSMC’s 5nm process to manufacture a new generation of SoC. Kirin 9000 has achieved a big leap in GPU.

Although we do not know the details of the Exynos 2100 SoC, it promises to be way better than the Exynos 990. The Snapdragon 875 may be released during the annual Snapdragon Summit, which will be held in December. It is worth noting that the Exynos 2100 performed disappointingly during the initial performance test. We do not know the reason for its disappointing performance. It may be due to the lack of firmware or proper optimization. In all, if Samsung hopes to compete with TSMC, it has a lot of work to do.