The market of wearable devices which comprises smartwatches, smart bands, TWS devices, and other related products recorded expressive results in 2020. This was rather surprising, after all, we’ve passed through a COVID-19 pandemic that disrupted most of the segments in the tech market. However, the wearable segment is going well. Huami, one of the most expressive companies in this category had a really busy year, but also, a very successful one. The company kicked with the Amazfit HomeStudio and Amazfit AirRun treadmills at CES 2020. The company also made its big entrance in the TWS earbuds market with the Amazfit PowerBuds and Amazfit Zenbuds. Just recently, the company kicked off a new brand dubbed Zepp with interesting and competitive smartwatches.

Namely, the company released in 2020, the Amazfit T-Rex, Amazfit Bip S, Amazfit Bip S Lite, Amazfit Neo, Bip U, GTR 2, GTS 2, and the Band 5 fitness trackers. Talking about the new Zepp brand, we have the Zepp E Circle, Zepp E Square, and the recently released Zepp Z. In the segment of health, the company announced the Amazfit Smart Scale. The company invested a lot of money to expand its business, but according to its Q3 financial report, it is collecting the fruits. 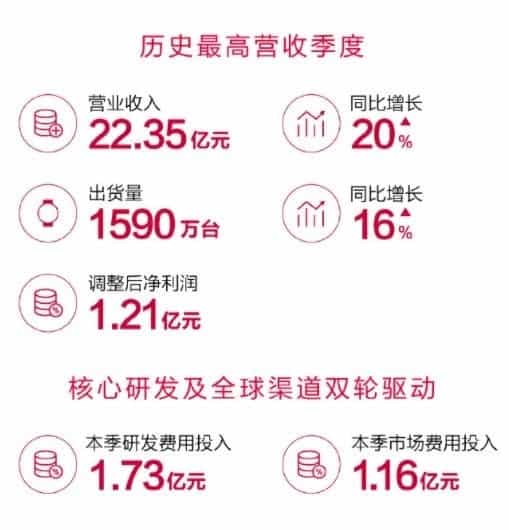 The Chinese manufacturer has been listed on the New York Stock Exchange. Therefore, it took to Weibo to reveal its latest achievements. According to the post in the Chinese Microblog, the company’s total revenue for the third quarter of 2020 was RMB 2.235 Billion (~$339,35 million), an increase of 20% from the third quarter last year. The company’s shipments were also up 16% from 13.7 million units in 2019 to 15.9 million units in Q3 2020. The report states that almost 50% of shipments were overseas shipments. Huami states the increase in sales was mainly driven by Xiaomi’s Mi Band 5 along with new models of its Amazfit smartwatches and earbuds. For those unaware, Xiaomi is a shareholder at Huami, but the latter acts as an independent company. Of course, the company hasn’t invincible to the COVID-19 pandemic. Huami states that the COVID-19 pandemic affected its sales negatively last quarter. It resulted in the delay of the launch plan for new products. It also delayed the actual production of new devices. However, the brand grew in some markets. The list includes European countries as well as China and the United States. Huami also shared its Research & Development expense for Q3 2020 is RMB 173 million (~$26.3 million). It is a 38.8% increase in comparison to the same period last year. The company also increased its expense in sales and market by 104.2%.

We expect the company to keep breaking records during the last quarter of 2020. The year is almost closing, but certification documents suggest the arrival of new Amazfit smartwatches.