This year, Apple announced a major change on its PC and MacBook lineup. The company is leaving the x86 platforms in favor of ARM-based chips. The company prepared the terrain with the release of the macOS Big Sur offering support for ARM chips and amazing compatibility with iOS and iPadOS apps. Just recently, the company unveiled the MacBook Air, the first of its MacBooks coming with the new Apple M1 chipset, the company’s first ARM-based chip for computers. The device passed through AnTuTu today and practically broke it with a score that is over 1 million. The iOS app for AnTuTu was used for the test, as we told before Big Sur ensures full compatibility. Interestingly enough, the Air was recognized as an iPad Pro in the tests.

This is just confusion made by the iOS app. After all, the MacBook Air with M1 is much more powerful than the iPad Pro with its A12Z chip. The CPU score is 50% higher, the GPU has a massive boost of 45%. The new laptop also has a faster memory. While the iPad Pro has a beefed chipset, in comparison to the original A12 present in the iPhone XS, it still is a 7nm chip with old generation cores. It was one of the best chipsets available before the arrival of the M1. It may be shocking, but the chipset is actually faster than the A14 present on the iPhone 12 family. 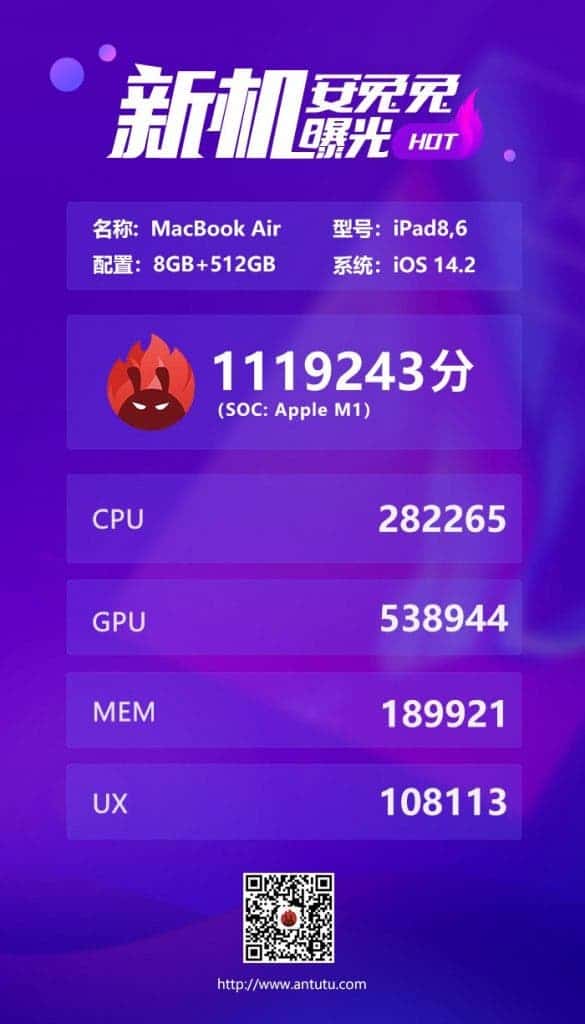 The Apple M1 shares similarities with the A14, but outperforms it in all segments

In fact, the A14 lags behind, but that is for a good reason. The chipset is slightly downgraded to not put much stress on devices with small batteries and bodies. With all its performance enabled it could easily wipe the iPhone 12 family battery or overheat the whole device. Both A14 and M1 are made from the same 5nm node and also boast the same architecture. Still, the M1 is much faster. Worth noting that the iPhone comes with a 2 + 4 architecture, whereas the MacBook chip boasts a 4+4 build. Moreover, the A14 GPU is downgraded with fewer cores than the M1. On paper, the M1 CPU is 78% faster and the GPU is 2.5 faster than the chipset inside of the iPhone 12 family.

Now, what remains to be seen is if Apple will keep the M-series exclusive for MacBook devices. We wouldn’t be surprised to see “mobile” versions of this chipset coming in the future, at least for the iPad series.

Next Apple iPhone 12 disassembly: material cost is about $373