In 2020, smartphone makers have taken a big hit during the first two quarters due to the ongoing COVID-19 pandemic. Meanwhile, the segment of wearables devices experiences great wins bypassing this crisis. Among the leading companies, we have Huami the Chinese company behind Amazfit and Zepp lineups. The company experience a massive boost in its sales during Q3 2020 and expects this to continue this quarter. Tomorrow, the company will unveil a set of new wearables with compelling features. Today, it is rolling out a new firmware update for all the owners of the Amazfit GTR 2 and Amazfit GTS 2 smartwatches. The update brings a set of new features, but the most interesting fact is that it bumps the number of available sports modes directly to 90. 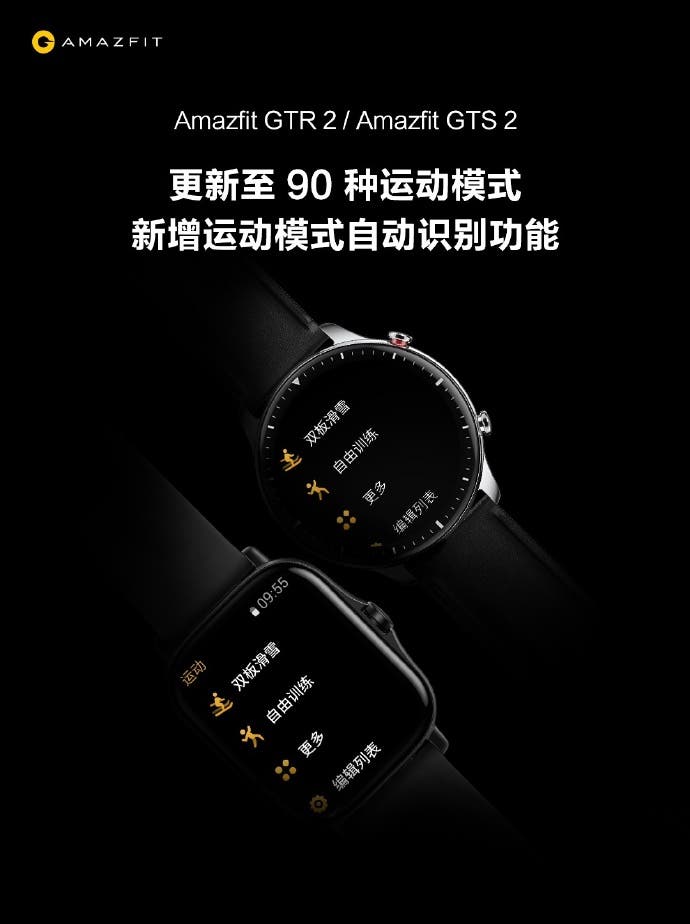 Amazfit took to Weibo to announced the rollout of this Android update. Yes, you’ve read right, for now, this is an Android update only. The update for iOS devices has been delayed as it has not yet passed the iOS app store review. The reason is that these processes are slower now due to the Thanksgiving Holiday season in the United States. However, the update can arrive in the coming days. When it comes to Android, the new firmware packs version number 5.6.0 and has already been reviewed by the various Android app stores.

According to Huami, the new update brings a new motion recognition feature which seems to be a plus. Moreover, it increases the number of supported sports modes to 90. Can you list 90 sports? Not an easy task huh? So we can pretty much say that the Amazfit GTS 2 and GTR 2 now are among the most complete smartwatches for sports tracking. What is more shocking is that when the wearables were released, they came with only 12 sport modes. So, Huami didn’t rest and brought a massive increase in this feature.

Users will be able to freely edit the list of supported sports modes. Therefore, they’ll be able to bring their favorite / most used sports to the top of the list. After all, there’s no point in having “Swimming” in the top of the list if you don’t practice this kind of activity. The changelog also states that the smartwatches will not light up every time a new message alert comes in. Apparently, this has been added to conserve more battery when you’re not actively using your watch.

The update is the third firmware update coming for the Amazfit GTS 2 and GTR 2. Both wearables were released in September, so we can say that Huami has release, at least, one update per month, which is great support.

Previous Samsung Galaxy Z Fold3 to cost around $2,040 just like its predecessor

Next Nokia 5.4 price info surfaces ahead of the launch

Samsung pulls One UI 3.1 update for the Galaxy S20 FE