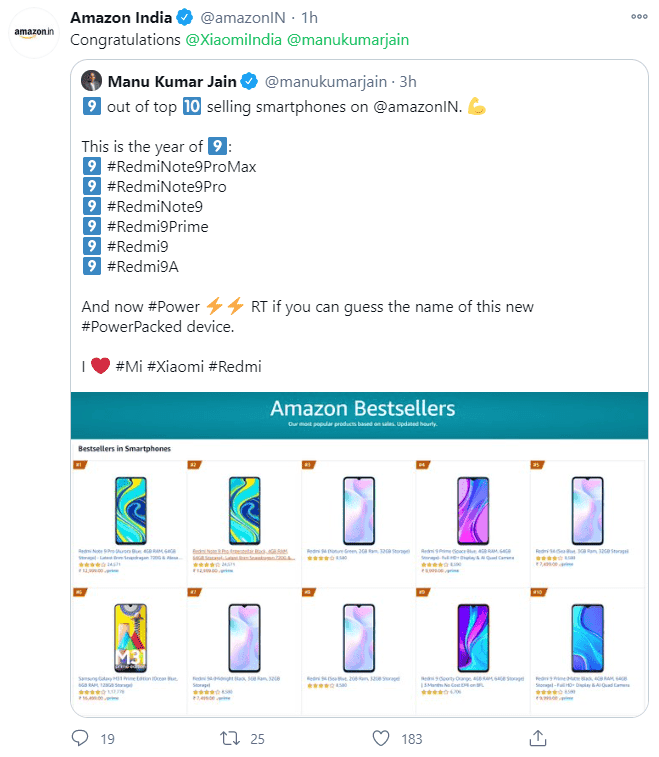 While other Chinese brands are improving their business in India in an attempt to topple Xiaomi, the Chinese manufacturer is not losing focus. According to a recent report from Amazon India, 9 out of the 10 best selling smartphones on Amazon India is from Xiaomi. Xiaomi India’s Managing Director and Global VP, Manu Kumar Jain, posted a tweet that shows that Xiaomi’s Redmi sub-brand is doing all the magic in India.

9⃣ out of top 🔟 selling smartphones on @amazonIN. 💪

And now #Power ⚡️⚡️ RT if you can guess the name of this new #PowerPacked device.

Furthermore, popular market surveys have shown that flagships are not for the Indian market. This is probably why the Redmi brand is doing so well in India. The most popular price range in India is between $100 and $300. Anything above this price range does not get too much attention. This is my the Xiaomi’s Redmi sub-brand focuses on entry-level and mid-range smartphones.

Interestingly, Xiaomi is only six years old in India. After its official entry in 2014, it has risen to the top spot in just a few years. As of Q3 2020, Xiaomi is still on top of the Indian smartphone market with a 26.1% market share. It readily beats the likes of Samsung, Oppo, Vivo, and Realme in India. If other manufacturers hope to beat Xiaomi in India, they must come up with a new price model. Redmi offers one of the best price-to-performance ratios in the world. This is instrumental to its performance in India.