After the ban on Huawei which prevents the company from using Google Mobile Services (GMS), the company eventually launched its own operating system, Harmony OS. This system is already available on some devices but not smartphones. However, there is good news regarding the arrival of Harmony OS 2.0 for smartphones. Huawei will hold a Beta event for Harmony OS 2.0 on December 16. This event is for mobile phone application developers. 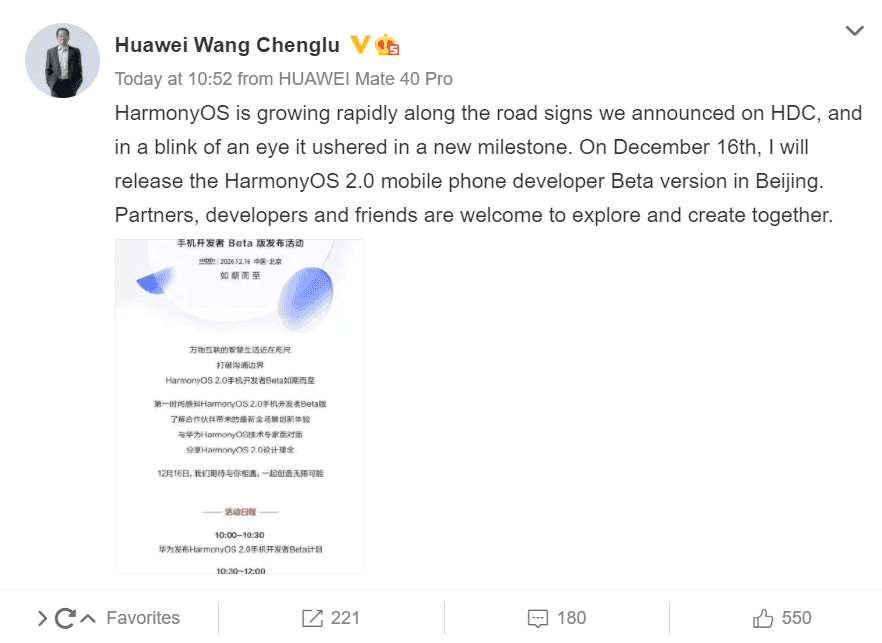 Huawei will release the Harmony OS 2.0 mobile phone developer Beta plan on the morning of December 16. In the afternoon of the same day, Huawei experts will explain the key features and development tools of HarmonyOS 2.0 mobile phone version Beta.

Let us now look at the major features that Huawei is promising its numerous users with the Harmony OS.

Before understanding EMUI, we must first talk about the relationship between EMUI, Android, and HarmonyOS. EMUI is the system UI design, while Android and Harmony OS are operating systems. To put it simply, Android and Harmony OS are like different cake bases. For EMUI, it is the icing on the cake which forms the complete product. Of course, we all know that the icing can be of different flavours. The different icing flavours are what we know as “EMUI”, “MIUI”, “ColorOS”, etc.

These interaction logics are consistent with smartphones. Not only smart screens, but there will also be more interactions with “Huawei” devices in the future.  Of course, it’s not enough that the interface looks familiar and consistent. The reason why Huawei developed Harmony and gradually switched from Android is to build a super terminal. The core of this so-called super terminal is to make the devices that make up the terminal regardless of the user.

Putting aside the multi-device design concept and focusing on the EMUI 11 system, as the core of “1+8+N”, the simplicity and efficiency of the system itself is also very important. The smart multi-window function of EMUI 11 gets some optimizations again. Users can drag, zoom, and hang an active floating window on the side of the screen.

In addition to interaction and animation, Huawei also adds new themes and AOD off-screen display to EMUI 11. Even for a small off-screen animation, Huawei’s designers have done a lot of research. For example, in order to make the deer walk more agile, the designer studied the details of hoofs and legs of hoofed animals, and the steps of four legs when walking.

In terms of themes, Huawei tried also to shoot real scenes of alcohol infesting ice cubes on the P40 as a new theme wallpaper. This method of “shooting real scenes for wallpaper” has also been used by Apple on iPhone and Apple Watch. It can be said that this is a real artistic creation, rather than using commercial materials for stitching like many years ago.

Previous Google will delete your Gmail account if you do this

Next Huawei nova 8 series finally gets an official launch date