Realme may be a new smartphone brand with just two years of existence, but it plays a big role in the market as one of the fastest-growing smartphone brands. The company also is pushing forward the growth in the wearable segment, AIoT, and 5G accessibility. Not long ago, the company unveiled the Realme X7 series, a new smartwatch dubbed Realme Watch S, and an unconventional product dubbed Realme Smart Bottle, which basically is a smart bottle. Today retail boxes for these aforementioned products have surfaced on the Realme India community. This hints that the company will soon launch these products in the Indian market. We don’t know if they will make it before the end of the year, but the new products are surely coming. 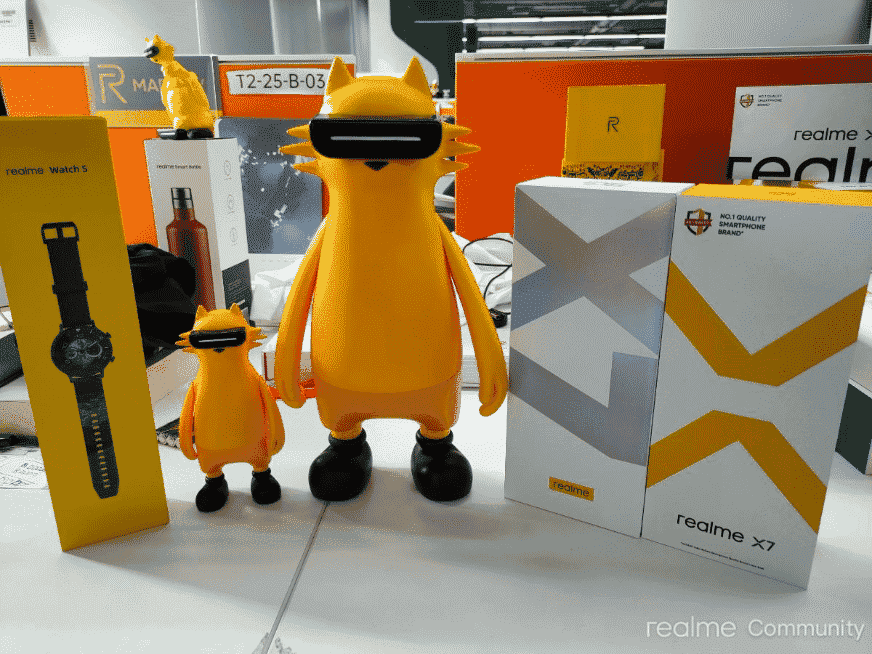 The leaked image comes from the user REALMEOW. According to him, he has captured the images straight from the Realme office. For those unaware, the yellow cat with a futuristic glass / VR is the REALMEOW, the company’s mascot. In the leaked image we can see three figures of the official mascot alongside two Realme X7 retail boxes. The right one is the Realme X7 whereas the left one with a large size silver color “X7” text on the box could be the Realme X7 Pro. It’s also possible to spot the retail boxes of the Relame Watch S and Realme Smart Bottle. Based on the recent reports, Realme will unveil the X7 series in India in early 2021. When it comes to the Realme Watch S and its Pro version, the company is gearing up for a launch on December 23. The wearables will be sold through the Flipkart platform.

The wearables and the smartwatches may be cool, but we all know that most Realme fans in India are more excited about the new smartphones. The Realme X7 is a 5G smartphone series and will make its debut in India despite the lack of operational 5G networks in the region. The handset flaunts a 6.44-inch AMOLED display whereas the Realme X7 Pro has a bigger 6.55-inch AMOLED panel. Both devices come with a 2,400 x 1,080 resolution and 90Hz refresh rate. Moreover, both devices come with Android 10 and Realme UI 1.0 straight out of the box.

The vanilla model brings a Dimensity 800U chipset while the X7 Pro has a beefier Dimensity 1000+ SoC. The exciting part of the Realme X7 series release in India is that it will bring these two chipsets that have limited availability outside of China. The vanilla handset has 6GB / 128GB, 8GB / 128GB variants. The Pro unit brings 8GB of RAM and 256GB of Storage.

In terms of camera, the smartphone brings a primary 64MP shooter, an 8MP ultrawide lens, and two 2MP sensors for depth and macro shots. In the selfie department, we have a 32MP punch-hole style camera. The vanilla X7 brings a 4,300mAh battery whereas the Pro model has a 4,500mAh unit. Both devices come with a very fast 65W fast-charging standard.