The new 5G rugged phone Oukitel WP10 5G is already selling in the market and if you get lucky, you can find it on sale with price around $399. That’s roughly the same price point as one of the devices from other famous rugged maker brand, namely the CAT S52. It was released last year, but the pricing is similar, so feels fair to try comparing these two in the main categories. So let’s get down to it.

Both phones of course share some similarities, as most of the rugged devices do. That means for example global availability, ratings IP68 and IP69K or the MIL-STD-810G certification. Both also support dual nano-SIM slots. But then we get to the difference and the list is pretty long, mostly in favour of the Oukitel’s rugged phone. WP10 5G really has some very strong points.

For starters Oukitel WP10 packs a massive 8000 mAh battery. It is built to pack enough juice for up to 48 hours of active use. CAT S52 on the other hand comes with a modest 3100 mAh battery,  roughly enough for 24 hours of usage

Oukitel device comes with a 6.67-inch Corning Gorilla Glass covered FHD+ punch-hole display. One of the largest displays on a rugged smartphone, whereas CAT S52 also comes with a Corning Gorilla Glass covered display, but with 5.56- inches and a HD+ 720×1440 pixel resolution. Oukitel WP10 5G is much bigger so better for entertainment purposes too, but CAT S52 fits better in hand due to the smaller frame. 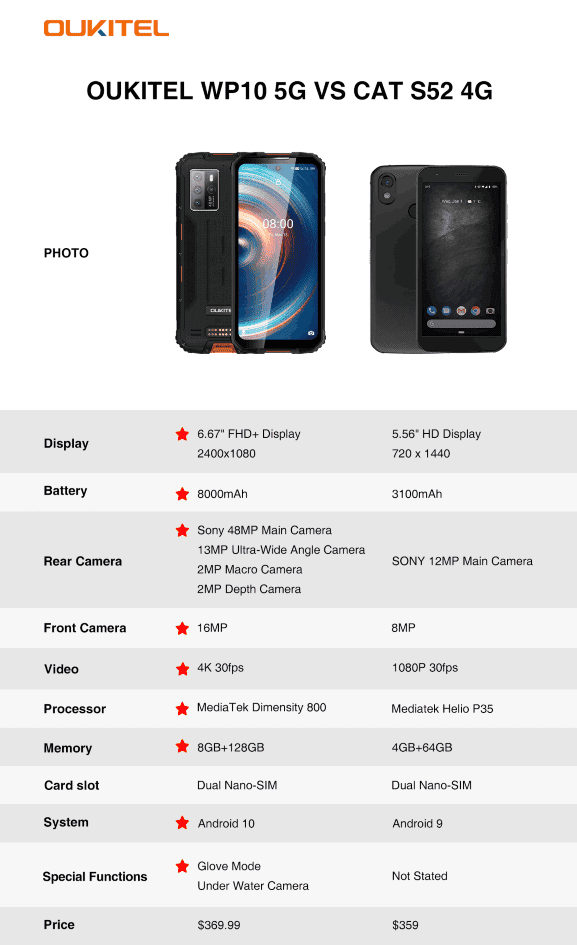 Oukitel WP10 5G is powered by MediaTek Dimensity 800 chipset, based on the 7nm process technology with an integrated 5G modem which allows for both SA and NSA modes. Furthermore it also comes equipped with 128 GB of UFS 2.1 flash storage and 8 GB of LPDDR4X RAM.

CAT S52 on the other hand comes only with 4G network support, midrange Mediatek Helio P35 8-core processor running at 2.3GHz with 4GB RAM and 64 GB of internal storage. 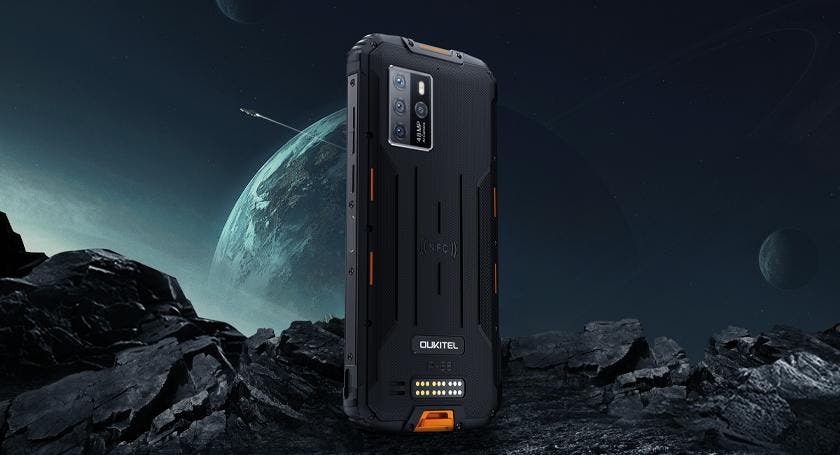 And we can find some other extra notable difference like the side-mounted fingeprint scanner on the Oukitel versus back-mounted on CAT. Or the special functions like glove mode, underwater camera mode or optional module support for the WP10 5G. All things considered, Oukitel WP10 5G aims to be more all-round mainstream phone with rugged capabilities, while CAT S52 still swears on the more typical rugged appearance. So which one you think would be better to get ?