Over the past 15 years, China’s integrated circuit industry has grown rapidly, with output value increasing nearly 14 times. China has an average annual compound growth rate of 19.2%, which is much higher than the global average annual compound growth rate of 4.5%. However, China’s high-end chips have a high degree of external dependence. The data released by the State Council shows that China’s chip self-sufficiency rate will reach 70% by 2025. However, IC Insights predicts that by 2025, China-made integrated circuit manufacturing will only account for 19.4% of the overall Chinese integrated circuit market. This is far below the 70% self-sufficiency target. 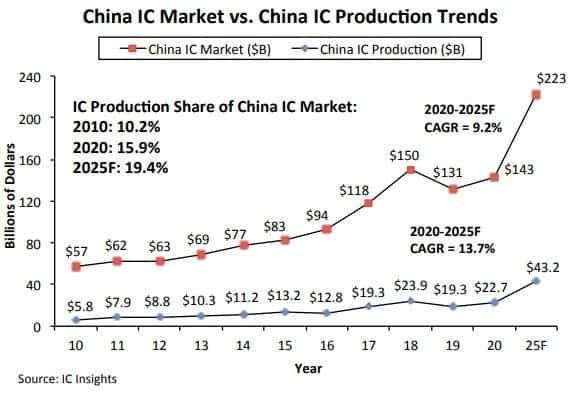 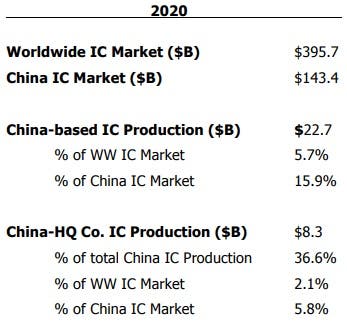 Last year, of the $22.7 billion worth of integrated circuits made in China, local Chinese companies produced only $8.3 billion (36.5%). This accounts for only 5.9% of China’s $143.4 billion integrated circuit market. TSMC, SK Hynix, Samsung, Intel, UMC, and other foreign companies with chip manufacturing plants in China produced the remaining chips.

If IC Insights prediction comes to pass, by 2025, China’s circuit industry will finance will increase to $43.2 billion. At that time, China’s integrated circuit manufacturing will still only account for 7.5% of the global market. The integrated circuit market should be worth about $577.9 billion in 2025.

Even if the sales of chips by some Chinese manufacturers increase significantly (many Chinese chip manufacturers are foundries, and they sell their chips to resell these products to electronic system manufacturers), the chips produced in China will still only account for 10% of the world’s integrated circuit market by 2025.

The current forecast is that China’s integrated circuit production will achieve a high compound annual growth rate. The growth rate will be up to 13.7% between 2020 and 2025. But considering that China’s IC output last year was only $22.7 billion, this growth started from a relatively small base.

Currently, Chinese memory companies Yangtze Memory and Changxin Storage are building new integrated circuit factories. However, IC Insights believes that foreign companies will account for a large proportion of China’s circuit production in the future. IC Insights predicts that by 2025, more than 50% of China’s integrated circuit production will still come from non-local companies. The likes of SK Hynix, Samsung, TSMC, and UMC will be at the forefront.