In a recent question and answer session, Xiaomi provided answers to questions regarding the MIUI+. Recall that the MIUI+ is was formerly called Screen Combo. This feature was only available for the Xiaomi Mi 10 Ultra and Xiaomi Mi Notebook Pro 15 (2020) at launch. However, it subsequently became available for more smartphone models. For now, this feature is available on only Xiaomi phones (Snapdragon models) and notebooks. However, it will soon be available for MacBooks and MediaTek (MTK) models. 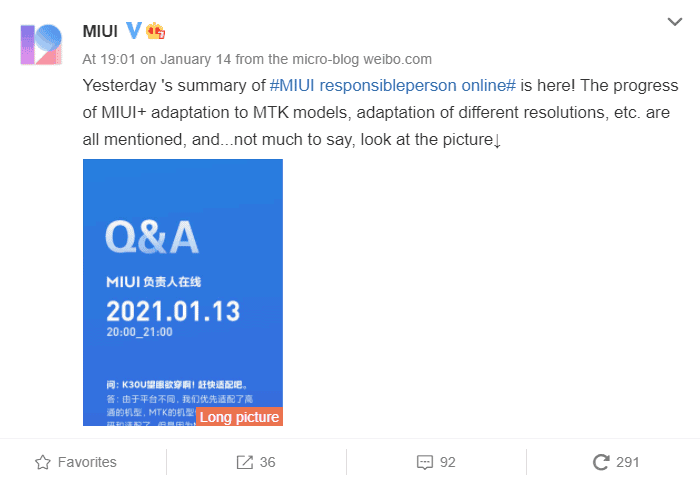 According to the Q&A, Xiaomi said that MIUI+ adaptation for MTK models is in progress. MIUI+ relies heavily on the chip’s network and coding capabilities. Thus, only models that can guarantee an excellent user experience currently have this feature. Furthermore, the company also confirmed that MIUI+ for MacBooks is in development. Also, users will soon be able to use this feature on a desktop to make a video call using the computer camera.

MIUI+ is an important feature launched by Xiaomi in the MIUI12.5 system update. It can project the screen of the mobile phone to the computer. It also supports features such as viewing mobile notifications, drag and drop transferring of files, two-way synchronization. As of now, only nine Xiaomi smartphone models support this feature. They include

Unfortunately, the Q&A session did not answer when the MIUI+ will be available for these devices. The complete Q&A is in Chinese and all the information is not entirely clear. We will keep a tab on the development of this feature. You will be the first to know when it is available

Xiaomi releases the first open beta of MIUI 12.5 with support for 28 devices

Xiaomi has announced the release of the first open beta version of the MIUI 12.5 user interface for Xiaomi and Redmi smartphones.

While public testing will take place in China. Previously, the company conducted closed beta testing and also only for Chinese users. At the moment, MIUI 12.5 supports 28 smartphone models.

Earlier reports claim that Xiaomi plans to start rolling out stable builds of MIUI 12.5 at the end of April 2021. And so far we are talking only about the Chinese market. The release date of MIUI 12.5 for international versions of smartphones has not yet been disclosed. The first to receive stable MIUI 12.5 will be the new Xiaomi Mi 11, as well as Mi 10, Mi 10 Pro, and Mi 10 Extreme Commemorative Edition.

MIUI 12.5 has received a slightly redesigned interface, new “super wallpapers”, many new natural sounds, it is lighter, faster and provides an improved interaction with Windows.