In October 2020, Huawei launched the Mate 40 series. At the press conference, in addition to Mate 40, Mate 40 Pro, Mate 40 Pro+, and Mate 40 RS were released. However, the company still unveiled the Huawei Mate 30E Pro 5G. According to recent reports, a new Huawei device (OCE-AN00) just got wireless charging certification. From all indications, Huawei seems to have a Mate 40 series model under development. This smartphone will use a 6.5-inch OLED screen with a resolution of 2376 x 1080. The name of this device will probably be Huawei Mate 40E. 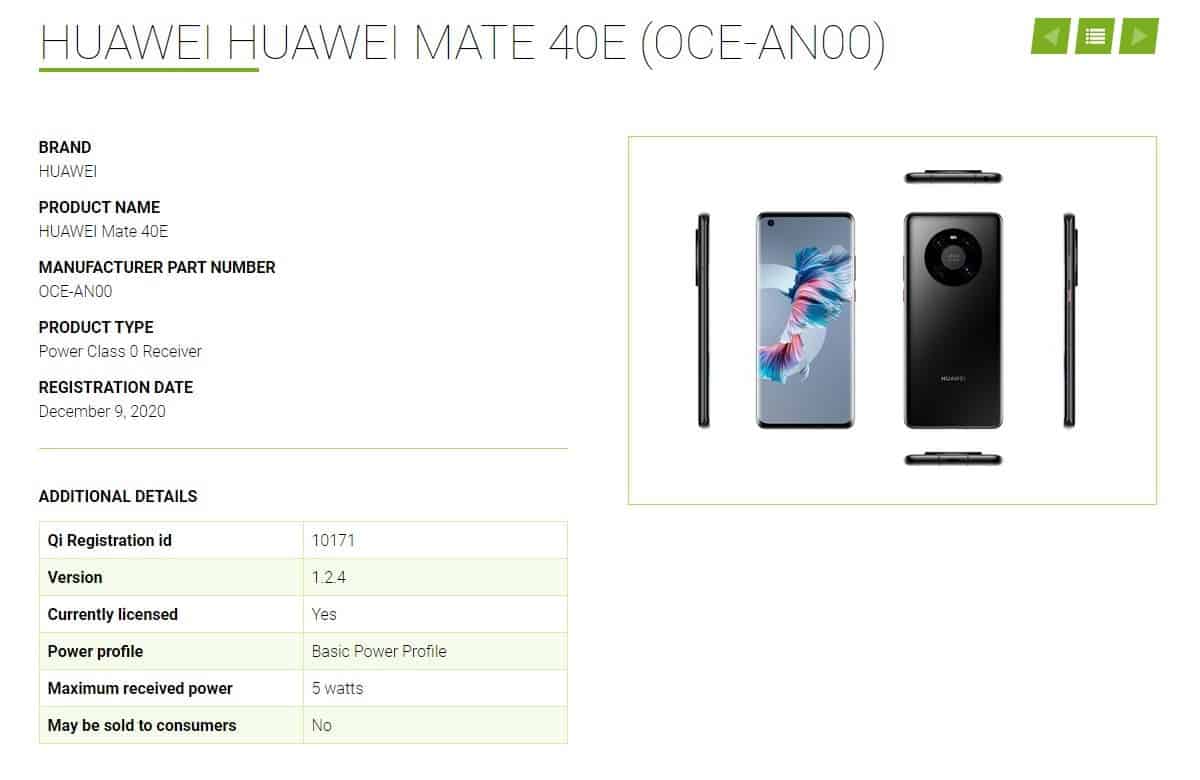 According to @DigitalChatStation, the Huawei Mate 40E (low model in the Mate 40 series) has not been released. This device will use a 64MP sensor instead of the 50MP IMX 700 sensor. He believes that due to the impact of the previous ban, Huawei’s major suppliers have not yet resumed supply. This has led to a shortage of core components of Huawei’s mobile phones.

Furthermore, he revealed that Huawei P50, Huawei Mate X2, and Huawei MatePad Pro 2 tablet will all use the Kirin 9000 series chip. Huawei’s inventory for the Kirin 9000 is less than 9 million. Even after releasing the Mate 40 series, Huawei claims that it has a reserve for the Huawei P50 and Mate 50 series.

The standard version of the Huawei P50 series will use a 90Hz refresh rate. However, the high-end version will have a refresh rate of 120Hz. This series will come with the Kirin 9000 and 9000E just like the Mate 40 series. In addition, the screen quality of this series of models is very good, and the rear Leica film camera will still be used. The main imaging system is similar to that of Huawei Mate40, but the binocular zoom factor increases by 200 times.

Huawei P50 series should come with a 66W wired fast charging + 50W wireless fast charging. At least, the regular version will use this charging configuration. As for the high version, Huawei is considering using a new 135W fast charging. However, there is no final decision yet as the company is still working on the battery density and durability.

Furthermore, reports claim that this device will not use the HarmonyOS 2.0. This means that it will still come with the EMUI 11 system.

In other aspects, the Huawei P50 series will come with 4 surround speakers and an upgraded vibration motor. Just recently, we have seen many renders referring to the P50. But it turns out they are fake, except for the basic version. Although there are many colors, there is no plain leather version. The body will be lighter and thinner than that of the Mate 40.

Huawei insiders say that the company is currently focusing on categories other than mobile phones. The Chinese manufacturer has its sight on the PC and tablet industry. It is also giving more attention to the wearable, audio, smart selection, and IoT industries.