According to reports, Facebook is testing a message push function to explain to Apple iOS users how Facebook uses their data to serve them personalized ads. Apple’s iOS 14 is about to usher in some important privacy settings changes. These changes will prevent Facebook and other platforms from collecting data about Apple users for targeted advertising. Facebook recently reminded its investors that Apple’s adjustments to the user tracking feature “Identifier for Advertisers” (IDFA) may affect its business. 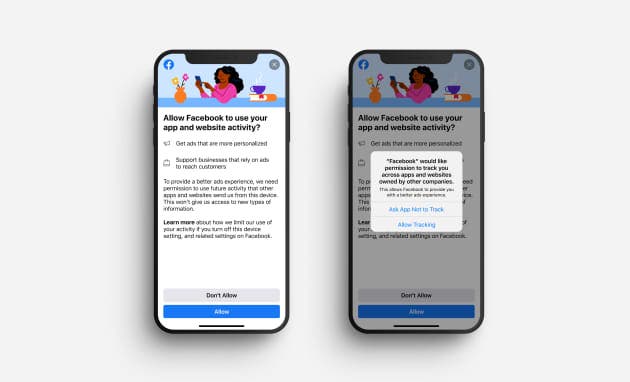 The news push feature that Facebook is testing works like this: First, it will ask Apple iOS users whether they choose to agree to the platform to collect their data, rather than asking them whether they refuse to collect data. Developers predict that in fact, only about 10% – 30% of users will actually agree to the platform collecting their data. Without access to user data, advertisers will find it difficult to target potential Apple users with personalized ads.

Although last quarter’s earnings exceeded expectations, Facebook’s stock price has been falling. This is because investors are worried that Apple’s privacy changes will significantly affect Facebook’s future performance. Previously, some media pointed out that Apple’s latest software update will ask users if they want to allow apps such as Facebook to track their online activities.

Facebook claims that Apple’s privacy settings changes will hinder the ability of small businesses to place targeted advertising. In the latest blog post, Facebook once again stated…“Apple’s new reminder information shows that it prohibits personalized advertising and privacy; but in fact, we can have both.”

In the past, most of the conflicts between large companies on platform policy adjustments had nothing to do with consumers. However, by sending reminders to users, Facebook’s billions of users were forced to be directly involved in the company’s and Apple’s complicated public struggle with changes to privacy settings.

Nevertheless, irrespective of the choice that users make on Facebook’s prompt, Apple’s prompt selection remains the final choice. Apple is directly responsible for the safety of user data on its devices. Facebook is only an app and does not have the authority to get user information if Apple says otherwise. Both companies have been at loggerheads for a while. From the latest events, the issues between these companies are not going away anytime soon.