In 2020, for any business, it was a heroism to keep the business running. And if the big companies were losing money, the small firms were closing doors. The same is true for the smartphone industry. The overall smartphone market dropped by 15% year-on-year. So that’s logical to know that almost all major smartphone manufacturers had decreased numbers. Only in the second half of 2020, we started seeing signs of market recovery. Due to the good performance of Apple and Samsung top-end models, the market began recovering. All these were clearly seen in the American smartphone market. Yesterday, CounterPoint provided the next report on this market. And it turns out OnePlus is the only company that had a positive growth rate.

According to the research company, OnePlus was able to grow its channel presence and overall size from a small base 163% YoY. Though the two main players – Apple and Samsung- did not provided detailed data about their performance, one thing is clear – they were down. 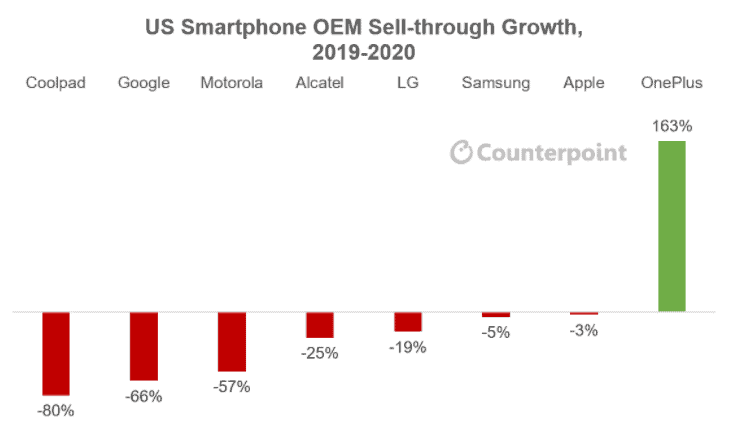 However, OnePlus could win this race and it was implemented mainly due to the close cooperation with operators. As you should know, it has long had a relationship with T-Mobile. OnePlus teamed up with T-Mobile back in 2018 launching the OnePlus 6T. And it has continued launching new devices in Sprint starting 2019. Moreover, the roots reached Verizon in 2020 with the OnePlus 8 UW. However, T-Mobile continues to be the largest source of sales for OnePlus.

Another factor behind the success of OnePlus in the American smartphone market is that this company has begun providing non-premium devices. But many know this brand though its high-end models. And in the picture of increased prices of iPhone 12 and Samsung Galaxy S20, the OnePlus smartphone look quite attractive.

However, we should state that in the American smartphone market, OnePlus still remains a small OEM despite the strong growth in 2020.

Previous Cheap Huawei P40 is on its way

Next Redmi Note 9 has passed an unusual durability test