In recent times, there has been so much emphasis on the charging capacity of a smartphone. In addition to the phone charging capacity, the charger rating plays a major role. Without a high-power charger, a phone can not meet its maximum charging capacity. These high-power chargers are getting more expensive, the more reason why manufacturers should exclude them from the box. The Xiaomi 65W GaN charger was released at the beginning of last year. Although this charger is not the official charger of the Xiaomi Mi 11, it seems to be desirable. 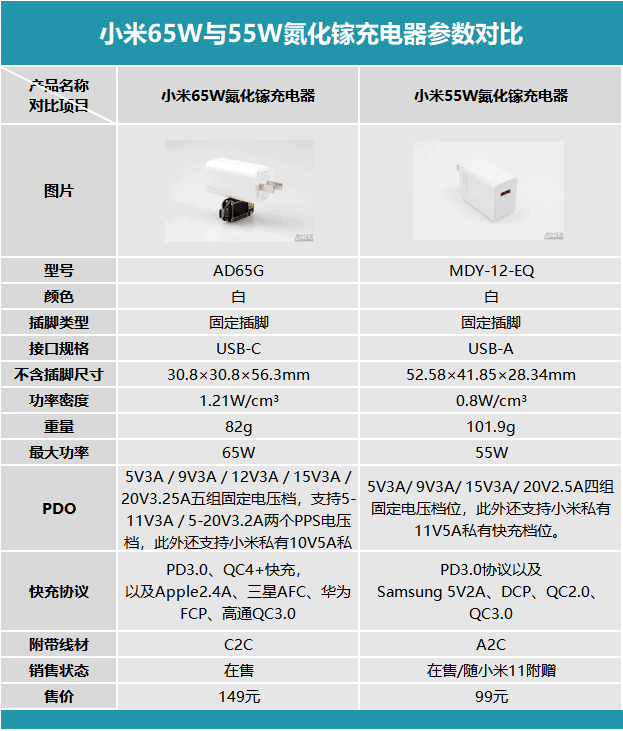 Some believe that the Xiaomi 65W GaN charger is better than its 55W counterpart. Thus, this article looks at the detailed comparison of these two chargers. You will be the final judge of which is a better charger.

Different from the appearance of smartphones, the appearance of chargers are relatively “monotonous”. This means that there is not much room for changing the appearance. The first thing to consider in the design is that it has to serve the purpose. Thus, looking at chargers generally, the differences are only in colour, body shape, and size.

The Xiaomi 65W GaN charger has a minimalist design, with a PC flame-retardant white shell. It also has a very light gray silkscreen on the side with the words Xiaomi 65W. Its overall shape is slender or elongated with a simple design. 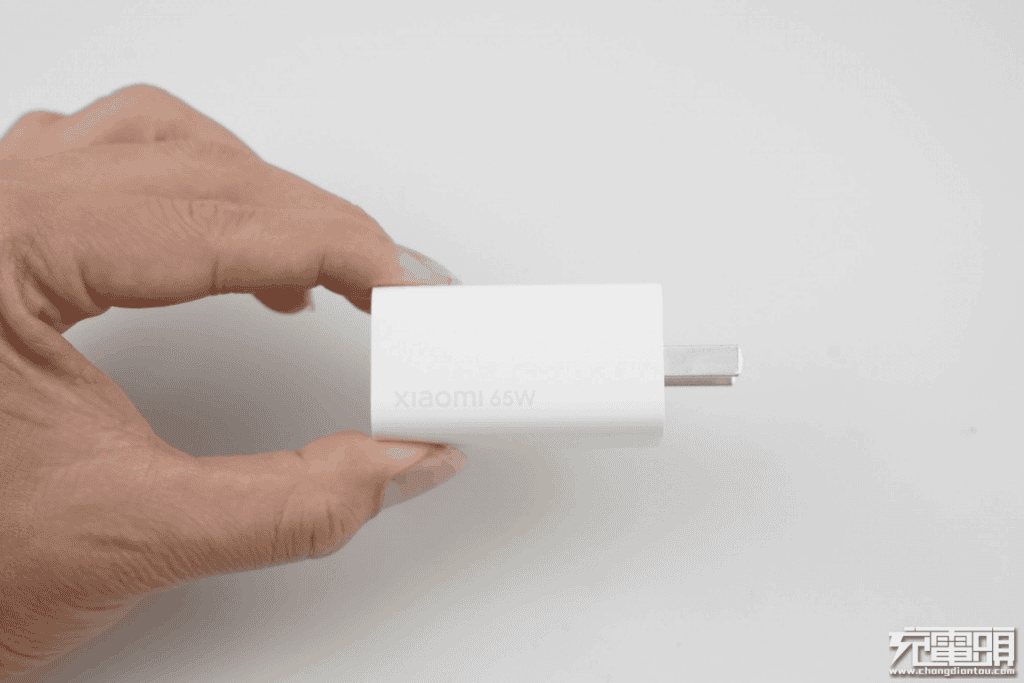 The appearance of the Xiaomi 55W GaN charger uses the “Xiaomi family” charger design. It is also made of a PC flame-retardant white shell. However, the transition on the sides is rounded while the pins and USB-A interface are on the side. This is typical of many Xiaomi chargers. 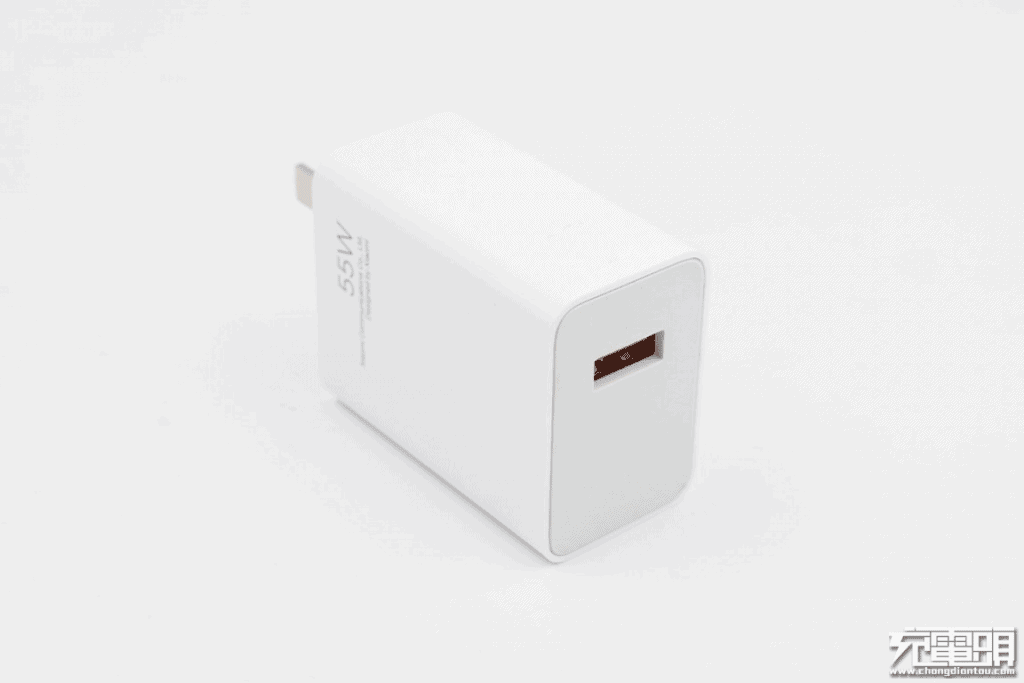 The Xiaomi 65W charger uses a single USB-C interface and this port is on top of the charger. The USB-C interface is the current trend and the future trend. As a separately sold charger, the use of the C port follows the trend.

The 55W charger adopts a USB-A interface, which is on the side with an orange-red plastic core. The positive and negative shrapnel of the A-port female socket is widened, and there is a special contact for PD output. 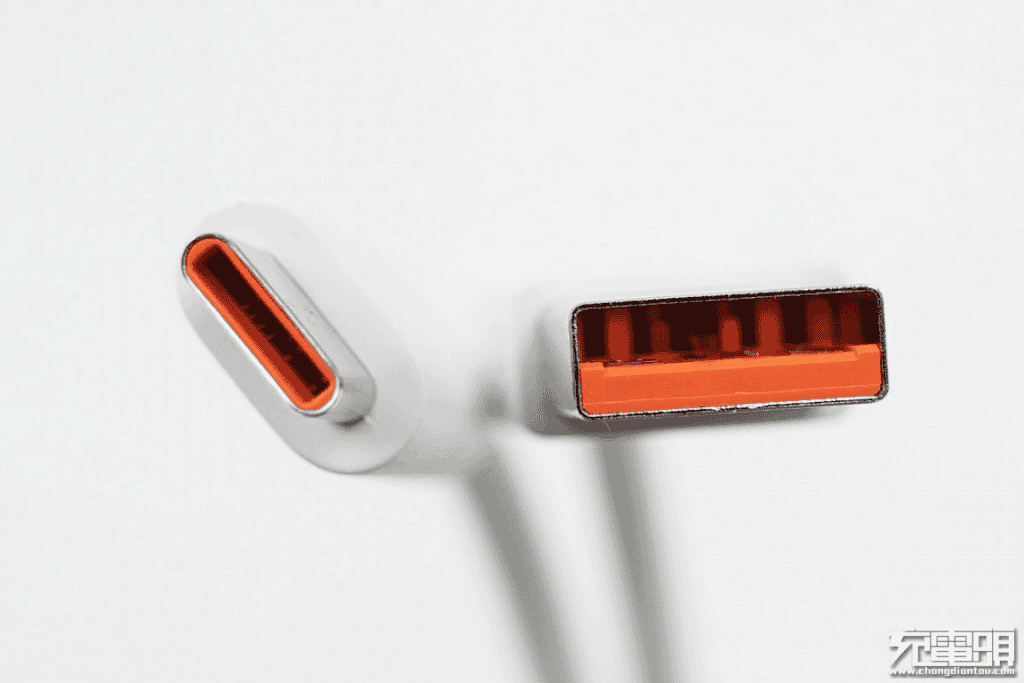 The Xiaomi 65W GaN charger uses gallium nitride power devices to break through the technical barriers. It condenses the charger volume to 30.8 x 30.8 x 56.3mm and the power density is as high as 1.21W/cm. The power density exceeds one cubic centimeter and more than one-watt output, marking the coming of a new era. The Xiaomi 65W weighs only 82g, which is even lighter than some 30W chargers.

The Xiaomi 65W GaN charger comes with a charging cable in the box. The cable is neatly bundled with rubber ties. The connector specification is USB-C to USB-C. With a length of 1 meter, the E-Marker information of the wire can be read through the POWER-Z KM001C tester. The wire supports 20V 5A current transmission capability. This is often referred to as 100W 5A E-marker wire. In terms of data transmission, it supports USB2.0 transmission rate. 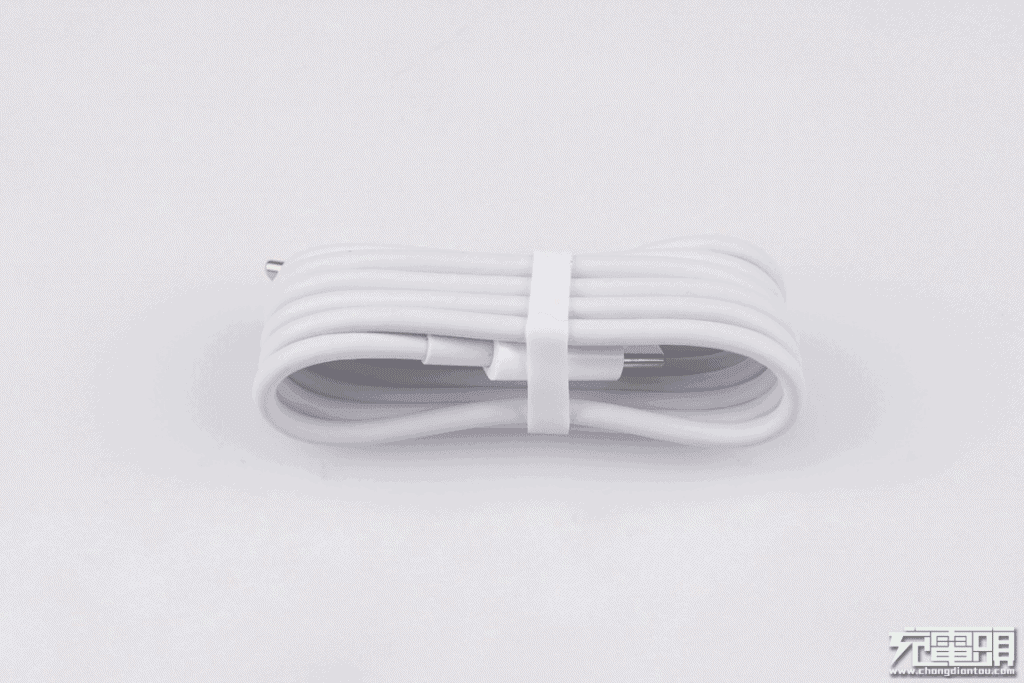 The charging cable that comes with the Xiaomi 55W is a USB-A to USB-C cable. Both ends of the cable are treated with anti-bending, and the plastic shell of the wire end is frosted, which is convenient for users to plug and use. The positive and negative poles of the USB-A male connector are wide so as to accommodate large currents. It also comes with special shrapnel at the center. The colour is orange-red, which is somewhat unique. The cable length is about 1m and the diameter is 3.73mm.

The fast charge protocol determines the range of devices that the charger will support. 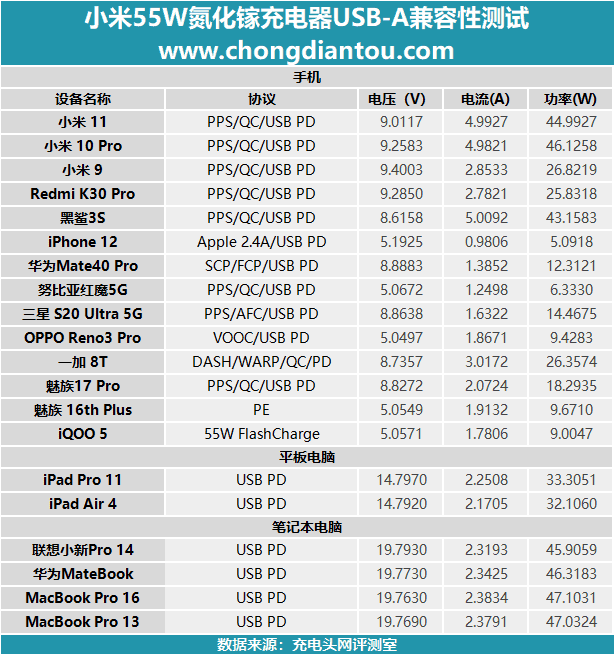 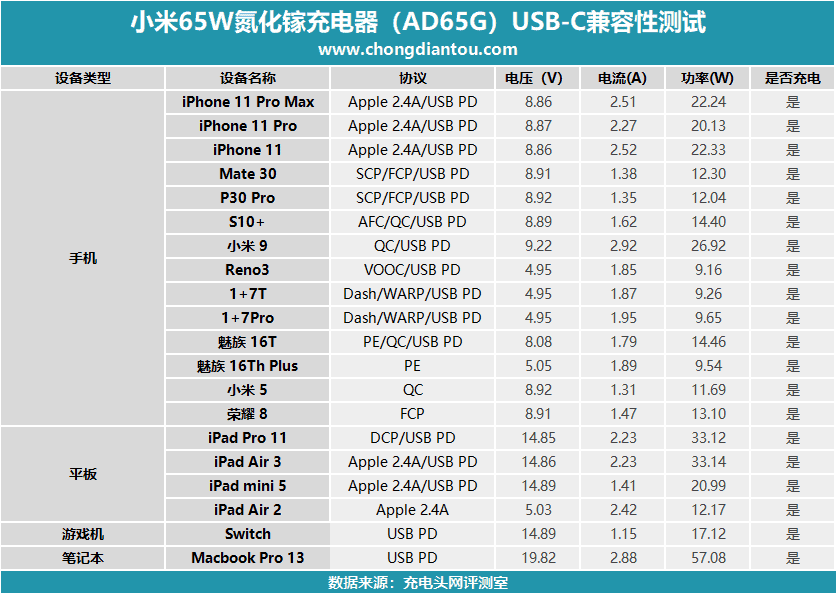 Using Xiaomi’s 65W GaN charger to charge the 13-inch MacBook Pro, the power reaches about 57W, which is really awesome. 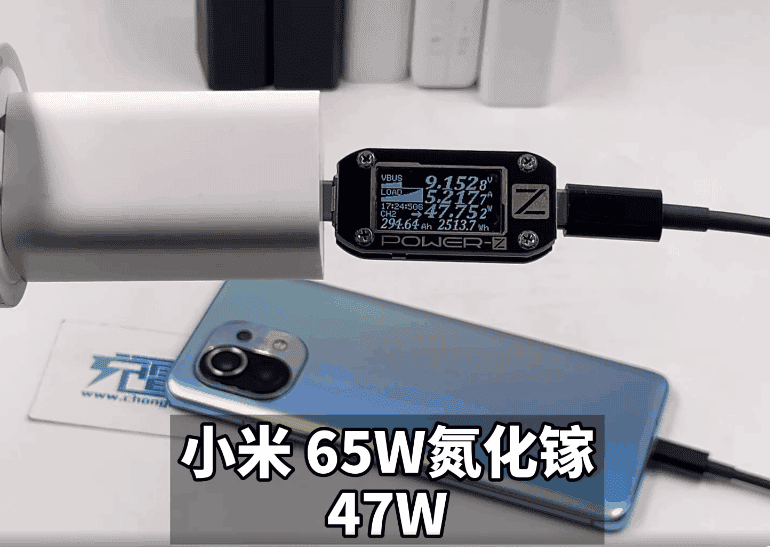 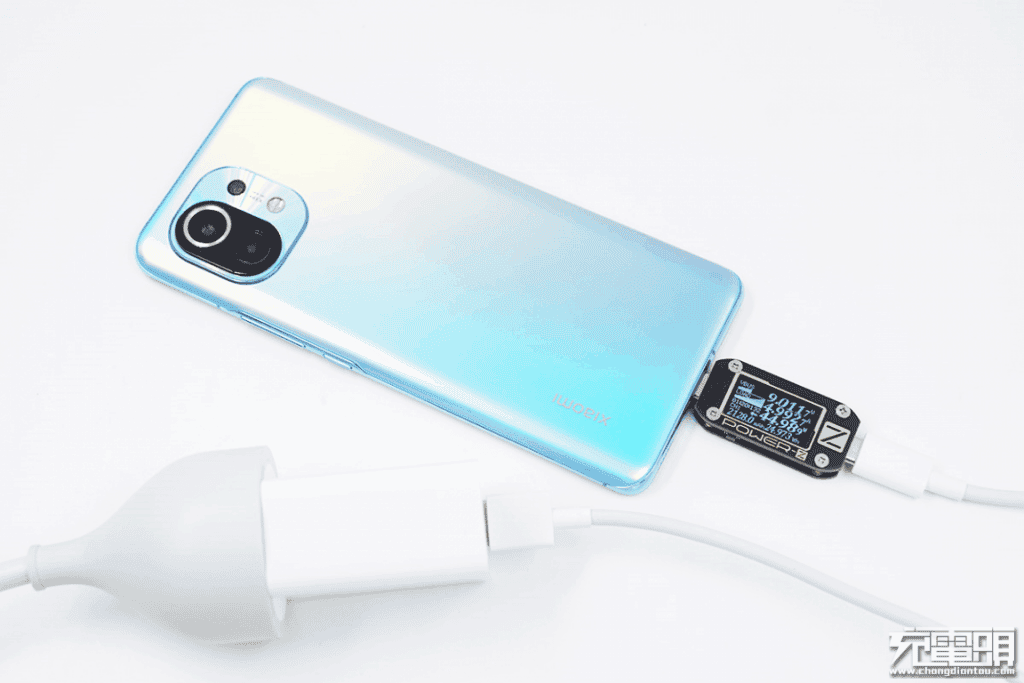 From the comparison above, it is clear which of the chargers is better. However, while the Xiaomi 65W GaN charger costs 149 yuan ($23), the 55W sells for 99 yuan ($15). Xiaomi did not include the 55W GaN charger in the Mi 11 box because it is better. It probably uses it because it outputs the phones maximum charging power and its cheaper,

Next Xiaomi Mi 11 is being promoted on a large scale