Huawei is still facing the U.S. ban and its smartphone business outside China is down. However, the company is not giving up and will release its next-generation flagship, the Huawei P50 series. A new report on Weibo shows more information about the Huawei P50 series. According to the report, this series will use a new generation super imaging system.  Furthermore, the company will also make significant changes to the ID design of the camera module.

However, @ChanganDigitalKing who leaked the information believes that the Huawei P50 series will continue to use Leica cameras. However, the rear camera will integrate more features and concentrate on its aesthetics. In all, Huawei will take a huge leap from the previous generation. 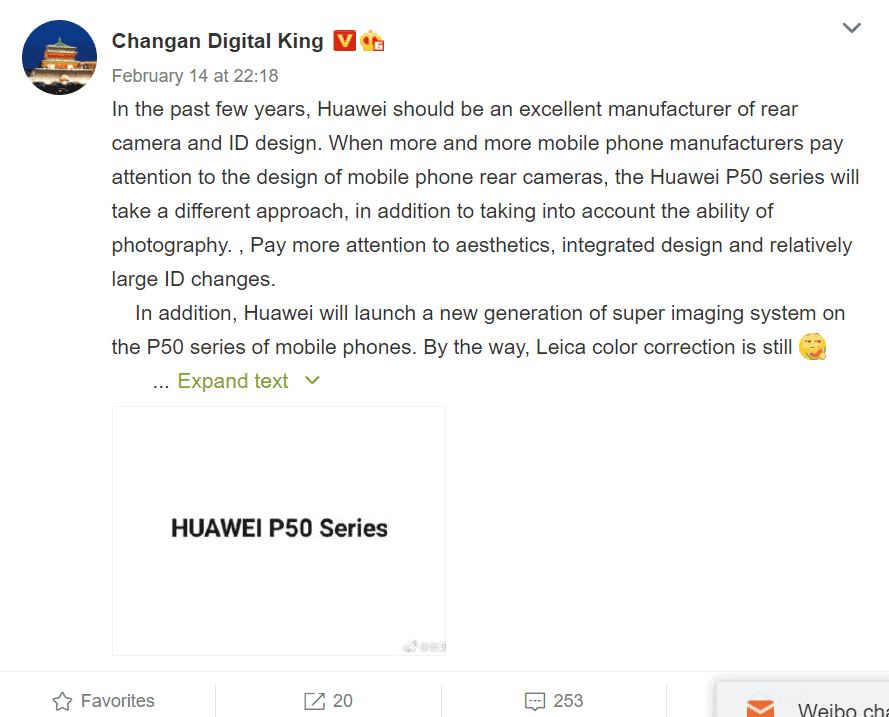 At present, most flagship smartphones, including the Huawei P40 series, use the matrix rear camera module, with multiple cameras integrated into a rectangular box.

Huawei P50 has a couple of similarities with older models

An image from @onleaks shows that the Huawei P50 Pro uses a 6.6-inch waterfall screen with a length of 159mm and a width of 73mm. aking a closer look at the render, the Huawei P50 Pro is very similar to its predecessor. It uses a very thin frame and curved display. However, this device has a center punch-hole camera as against the pill-shaped punch-hole on its predecessor. 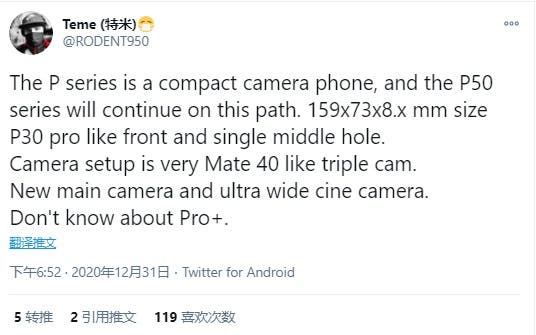 This dimension of this phone is also similar to the Huawei P30 Pro. Furthermore, the screen and camera settings are very similar to the Mate 40 triple camera. However, the new series has a new main camera and an ultra-wide-angle camera.

According to recent speculation, this device may have as many as three models. This information (leak) is coming from popular leakster, @rodent950. The leak shows that there will be a compact 6.2-inch model, a medium 6.6-inch model, and a large 6.8-inch model. We expect these three models to be the P50, P50 Pro, and P50 Pro+ models respectively. The Huawei P series is usually a compact camera phone, and the P50 series will continue to follow this path. The leak also shows that the dimensions of one of the models are 159mm x 73mm x 8.x mm.

Also, the leaks so far suggest that the P50 will use a standard earpiece design. This is quite different from the magnetic suspension screen sound technology used in the Huawei P40 series. For now, this is about the much we know regarding the upcoming Huawei P50 series. We will keep a tab on the development of this device and let you know when there are new details.

Previous LG Rollable phone may come with a secondary screen