A couple of years ago, ZTE was in a similar situation as Huawei is currently. The Chinese firm was the first brand to become listed as a US-banned company. Unlike Huawei, ZTE has violated certain sanctions by dealing with Iran. Therefore, the US applied a ban preventing the company from using software or hardware with US-based technology. Unlike Huawei that has enough resources to keep fighting in the market, ZTE almost closed its doors without hardware or software to keep pushing smartphones. Some Chinese chipset makers such as UNISOC weren’t ready for providing chips in a large scale, or with cutting-edge technology, at that time. 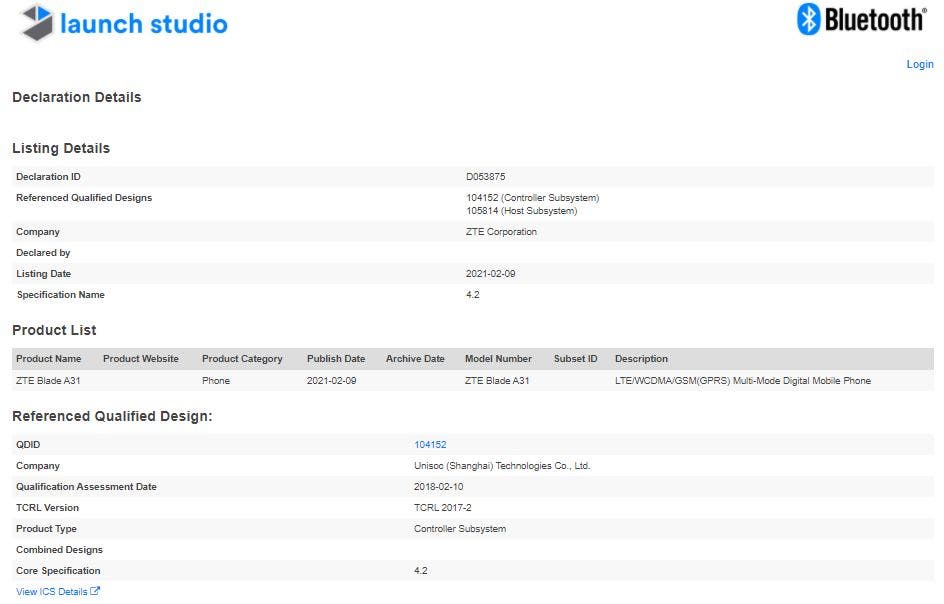 A couple of months after the ban, the Chinese company and Trump’s administration found an agreement, allowing the company to return to the market. ZTE may not be among the top-selling smartphone brands in the world, but it is running to bring innovation. The brand was the first to deploy a smartphone with an in-display camera and is set to introduce more innovative devices this year. Now, the company is gearing up to bring a new ZTE Blade A31 smartphone, and unlike mainstream devices, it packs a UNISOC chipset.

Today, the new ZTE Blade A31 has passed by Bluetooth SIG certification. The regulatory agency usually does not bring any information apart from connectivity features. However, today, it confirmed that the upcoming phone will pack a UNISOC processor. As far as connectivity is concerned, the ZTE Blade A31 will pack Bluetooth 4.2 and LTE. So it’s easy to assume that this is a low-end smartphone. The device should be positioned under the ZTE Blade A51 that passed by FCC back in November.

The device may carry a similar design to that of the ZTE Blade A51. We expect a plastic smartphone will at least a dual-camera setup on the back. It may also come with a fingerprint scanner and an LCD display. Hopefully, the big battery will be included in the package with Android 11 running on top. The ZTE Blade A51 has a waterdrop notch display and a dual-camera setup on the back. So we expect the A31 to be slightly below this standard. Unfortunately, we don’t know which UNISOC chipset will be present here, hopefully, it will be one of the company’s Octa-Core solutions.

ZTE is yet to give an official statement regarding the launch of the Blade A51. The device appeared in FCC in November, but still haven’t been released. We expect both devices to come at the same launch date.

For those unaware, UNISOC is a Chinese chipset with a long story. The chipset maker already partnered with Xiaomi in the past. It is gaining more relevance now that Chinese companies are pushing the home market of chipsets. After the US ban, Chinese brands need to push local manufacture of chipsets to use it as an alternative. The chipset maker is already working on 6nm chips, so it can be a worthy competitor in the future.

Next Apple Store gradually resumes in-store shopping in the U.S