According to Realme’s executive, Realme’s new flagship is coming soon. However, speculations are that the company will release its new generation flagship phone in March. This device will come with the 5nm Snapdragon 888 SoC but this chip is not the focus right now. According to recent reports from @DigitalChatStation, the company will officially call this phone Realme GT. Presently, we know this device as Realme Race but this is only a codename and not a market name. This device will also be the first smartphone in Realme’s new GT series.

Furthermore, the leak says that the Realme GT is a semi gaming phone. This smartphone comes with a high refresh rate (160Hz), super-fast charging (125W), and it’s also very thin despite its huge battery. This smartphone is set to use the most powerful fast charging technology. According to reports, Realme GT’s 125W fast charging technology uses a parallel three charge pump solution with a conversion rate of 98%. It only takes 5 minutes to charge a 4000 mAh battery to 41%, and it can be fully charged in 20 minutes.

Sometime last week, this smartphone appeared on TENAA giving us a glimpse of what to expect. The images show that the Realme GT will continue the full-screen design of most Realme phones. There is a punch-hole camera on the top left side and at the rear, there is a triple-camera setup as well as an LED flash. The volume rockers are placed on the left side of Realme GT. On the right side of the smartphone, there is a power button. 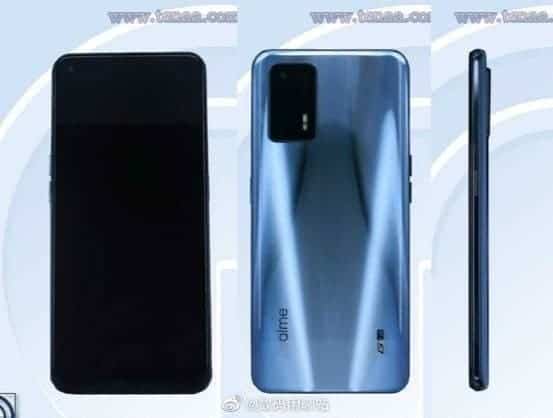 According to various reports and leaks, in addition to the SD888, Realme GT will come with an Adreno 660 GPU. The smartphone pairs a 12GB LPDDR5 RAM along with 128GB/256GB/512GB storage options. Realme GT features a 6.8-inch display with 1440  x3200 pixel resolution and has a 20:9 aspect ratio. The reports, for now, claims that this device will use a 2K/160Hz ultra-high refresh rate screen

This smartphone comes with a 64MP primary camera and two 13MP camera sensors along with LED flash. On the front side, there will be a single punch-hole camera (the camera sensor is still unknown).

The smartphone is expected to have a huge 5000 mAh battery with 125W fast charging support. Realme GT is expected to come with Realme UI 2.0 based on Android 11 out of the box.