Sony isn’t the most appealing smartphone maker lately, but the brand is still there rocking with yearly smartphone series. The brand also did a stellar job by providing a faster Android 11 update for most of its smartphones recently. Now, it is starting to shift its focus to the new 2021 smartphones, presumable the Xperia 1 III and Xperia 10 III. The first will be a new flagship smartphone with the usual “professional-camera-centric” approach. The second is a new mid-range smartphone and has just made its first appearance on the Geekbench benchmark.

According to the popular benchmark listing, the phone will have come with a Qualcomm lito platform. For those unaware, this codename belongs to the Qualcomm Snapdragon 765G. This chipset isn’t a new name since it has been available in a plethora of smartphones since the last year. It was the first Qualcomm mid-range chipset to come with a 5G modem. Usually, devices with it are more expensive than those with MediaTek Dimensity chips. We’re not expecting the Xperia 10 III to be away from this expensive curve. 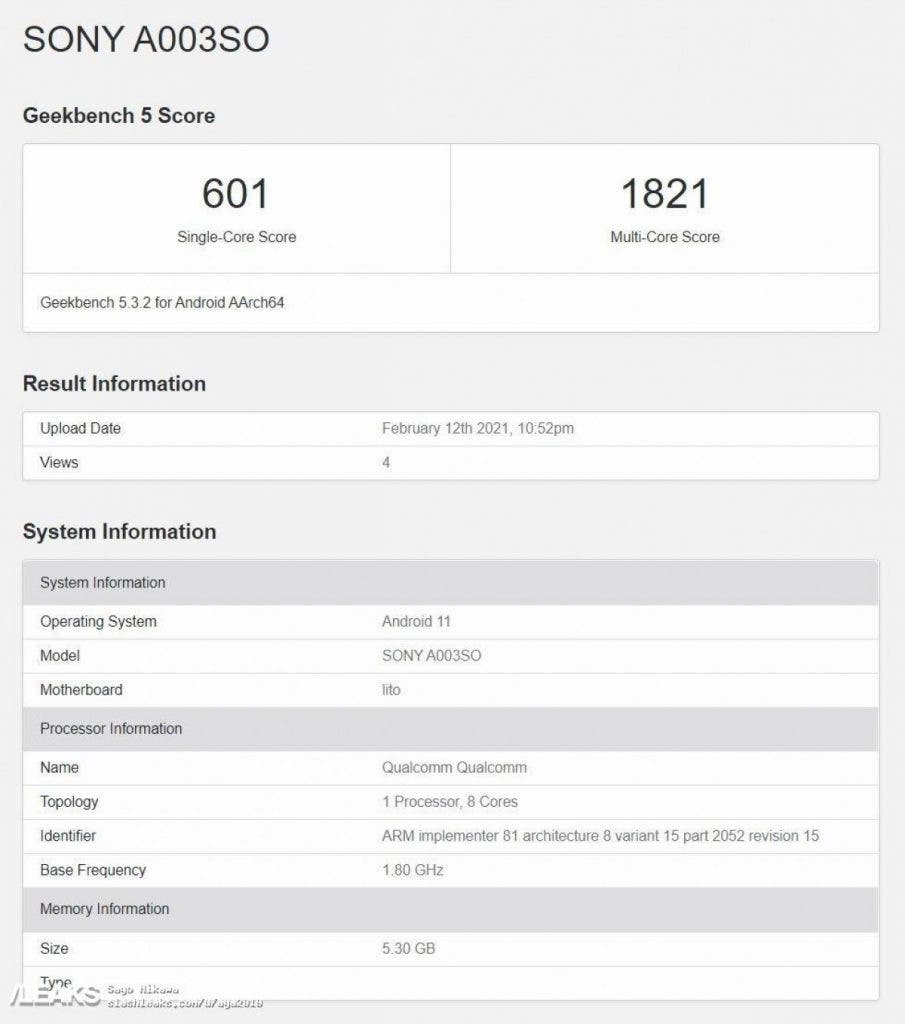 Despite the SoC’s hidden name, the Geekbench results are on par with other SD765G-powered smartphones. It scores 601 in the single-score and 1,821 points in the multi-core department. The phone also comes with 6GB of RAM and runs Android 11 straight out of the box. The surprise here is to see a relatively-old chipset coming in this phone. Previous rumors were suggesting a Qualcomm Snapdragon 690 5G which is a newer platform. However, in the end, I still prefer the Qualcomm Snapdragon 765G since it still blows away anything in the SD6xx family. This also means a major upgrade for the Xperia 10 series. After all, the last year’s Xperia 10 II was a modest smartphone featuring a Snapdragon 665. As we mentioned before, we expect this upgrade to also come with a newly elevated price.

Another point of the upgrade is the amount of RAM. It’s the first time that an Xperia 10 phone comes with 6GB of RAM. Both predecessors maxed out at 4GB of RAM. It’s good to see that Sony is finally catching with other brands in the segment. After all, 6GB RAM already is a standard for upper-mid-range phones. The previous models came at a relatively low price tag of around $350. We expect the new model to have a higher pricing point between $380 and $450. But, Sony can still surprise us.

Next Android 12 is set to introduce Google "Material NEXT" design