Realme is one of the hottest smartphone makers in the market right now. Despite the last year’s pandemic, the brand made great efforts to consolidate its name in the market. Once again, it was the world’s fastest-growing brand, but 2020 was important in several ways besides the smartphone market. Last year, Realme has consolidated its name as a lifestyle brand that provides more than just smartphones. The company introduced a bunch of new products such as smartwatches, TWS earphones, and even smart TVs. For 2021, we expect the company to bring more products under its lifestyle category. Apparently, the road of audio products will start with the new Realme Buds Air 2 TWS earphones.

As the name, obviously, suggests, the Realme Buds Air 2 TWS are direct sequels based on the last year’s model. However, they will look similar to the Buds Air Pro, coming in Black color, with Active Noise Cancellation (ANC). Today, a bunch of new screenshots of the Realme Link App emerged. It brings new additional information about the new pair of hearables. 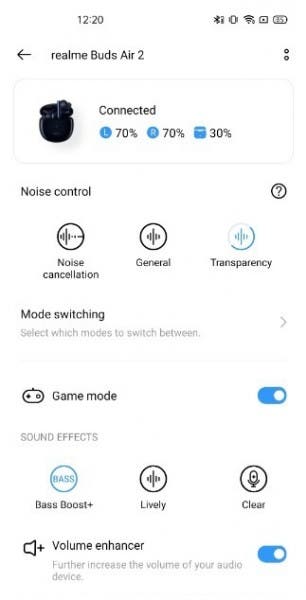 According to the leaked shots, the Realme Buds Air 2 will come with General and Transparency Modes in addition to Noise cancellation. The brand is also introducing a new Game Mode. As the name suggests it will improve the gaming experience by reducing the latency. There is also a Volume Enhancer that will further increase the volume in case your track isn’t loud enough. This is a feature that was absent in the first-generation of the Buds Air. It didn’t come with the Lively, Clear, and Bass Boost+ sound effects as well. The brand wants to offer a deeper experience with the new generation of Air Buds. We’re not sure if they will come at the same price as the previous models. After all, ANC isn’t a feature that is available in the cheapest earbuds on the market.

The Realme Buds Air 2 will also come with In-ear detection and Auto Answer. Moreover, apart from the usual touch controls, the brand is introducing a new gesture that will let you touch and hold the left and right earbuds at the same time to switch noise cancellation. On previous TWS earphones, you could only use this gesture on one bud at a time.

Now one question that remains is whether the new earbuds will come with wireless charging. Worth noting that this feature is available in the first model, but Realme removed it on the Pro model due to ANC inclusion. As aforementioned before, ANC earbuds are costlier, so Realme may remove the wireless charging to not make the newer model more expensive.

Unfortunately, there still no word on the release of the Realme Buds Air 2. However, Madhav Sheth, Realme’s CEO, teased new TWS earphones with ANC, Transparency Mode, and touch controls. He probably refers to the Buds Air 2. So we expect more details to appear in the coming days.

Worth noting that Realme is also preparing the terrain for the Realme Narzo 30 series that will come alongside new Narzo-branded gaming accessories. We will not be surprised to see the hearables coming on the same date.

Next Galaxy A52 4G & 5G full specs, pricing, and images surface in the web