Huawei and Samsung kicked off the market of foldable smartphones two years ago. The former unleashed its Huawei Mate X, while the latter brought the Samsung Galaxy Fold. The devices were unveiled in the beginning of the year but only reached the market several months later. Huawei performed well with the Mate X, but only Samsung managed to keep pace in this segment. The ban imposed by the US government forced Huawei to leave this segment for a while. Two years have passed, and the Korean firm has the segment under its belt. Now, Huawei will try to recover its slice of the market with the long-waited Huawei Mate X2.

Earlier today, the company shared a new image poster on Weibo. The teaser published in the Chinese microblogging website shows the device’s seamless folding design. It’s quite different from the design used on the Huawei Mate X. In the Weibo post, the brand teased the upcoming phone via a GIF image that teases its folding design. The tech giant also added that the closing and opening action of the handset is “seamless.” Earlier this week, Huawei had shared a teaser image, which also highlighted its folding mechanism. Looking at the poster, the animated image depicts the unfurling action of the handset.

Talking about the handset, it is the successor to the company’s first foldable handset. It is set to arrive with an 8.01-inch foldable display developed by China’s BOE technology. The handset may come with a 2,840 x 2,220 resolution. It is expected to pack a 6.45-inch display on the front and it will offer a resolution of 2,270 x 1,160 pixels. As you can already conclude, the device has a dual-display design.

The Huawei Mate X2 will draw its powers from a 4,400mAh battery. It is powered by the Kirin 9000 chipset. An intriguing fact is that it is expected to run Android 10 OS. If you’re aware of Huawei’s situation, you know that the company is blocked from using Android 11 and future Android updates. 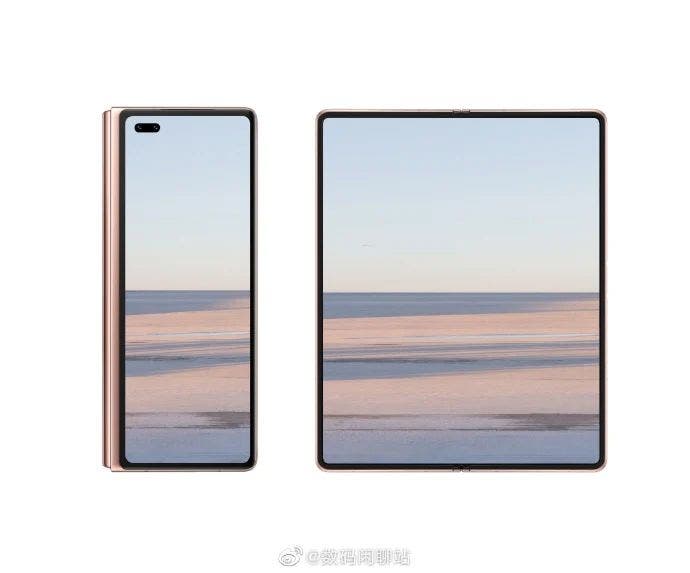 Other specifications include rapid 66W charging. In the camera department, the phone will pack a 16MP selfie and Quad-Camera setup on the back. The main camera island will bring a 50MP main camera, a 16MP camera probably for ultrawide, a 12MP sensor, and an 8MP sensor. We’re not sure about the purpose of each sensor, but we expect at least a telephoto camera among these modules.

We expect more hints to pop out in the coming days as the handset is nearing a release. Moreover, Huawei probably will showcase the device during MWC 2021 Shanghai set to happen in the next week.