The upcoming Lenovo gaming smartphone is equipped with two fans

According to the official announcement, the next-generation Lenovo gaming phone will be called the Savior Gaming Phone 2 Pro. It will be based on the Qualcomm Snapdragon 888 SoC and will be the world’s first phone to feature a dual-fan cooling system.

The company previously said that this device will be the world’s most powerful, innovative and coolest gaming phone. The device is equipped with the fastest RAM and flash memory for maximum performance.

The Savior Gaming Phone 2 Pro will use the new TSI Frost Blade cooling system, along with 14 temperature sensors that monitor real-time heating and regulate the cooling system.

The manufacturer claims that the new product will surpass all gaming smartphones in performance this year. 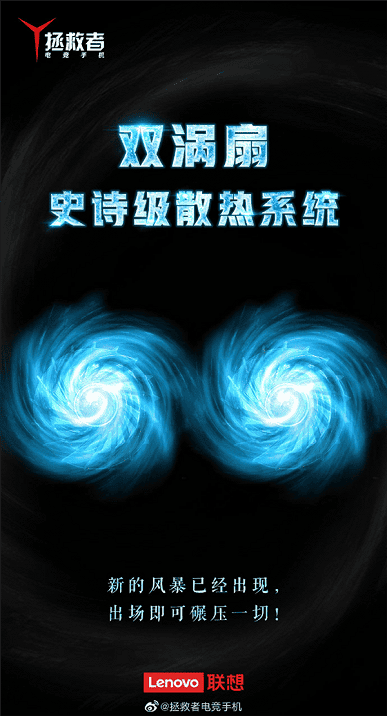 Since the beginning of 2021, many gaming smartphone brands have started to tease the arrival of their new contenders. The list includes Asus, Xiaomi’s Black Shark, and Nubia’s Red Magic. We have been waiting for news about Lenovo’s Legion gaming phone series. The brand launched just a single smartphone last year and is giving its first steps in this segment. Recently, the Chinese firm finally made its move. Lenovo is teasing its next gaming phone through Weibo. The teaser reveals only that cooling will be a centerpiece of the device and that the device will, obviously, be part of the Legion lineup.

The post was made by Lenovo General Manager Chen Jin. According to him, the phone will be feature-packed and will not compromise on anything to achieve the ultimate gaming experience. He also promised a Spring release for the handset. The new handset may carry the Lenovo Legion Pro 2 moniker. Obviously, as a gaming flagship, we expect it to pack the latest Snapdragon 888 chipset. It will probably come with up to 16GB of LPDDR5X RAM. As the leak suggests, it will have some sort of active cooling, being it built-in or an attachable accessory. Considering the first handset, we expect the new model to pack an AMOLED screen with at least 144Hz refresh rate and a 5,000mAh battery.

The device is available in multiple configurations with 8GB, 12GB, and even 16GB of RAM. Storage goes all the way from 128GB to 512GB in the high-tier variant. The phone has a Dual-Camera setup and that is pretty much understandable, after all, gaming phones don’t need to focus on this department. Still, the device has a capable 64MP shooter with PDAF plus a 16MP ultrawide sensor. The device has Stereo Speakers, Bluetooth 5.0, and Wi-Fi 6 support.

It draws power from a huge 5,000mAh battery with a whopping 90W fast-charging system. This can fill 50% of the battery in just 10 minutes. A total charge will take just 30 minutes. We expect this charging system to make its comeback with the Lenovo Legion Pro 2.

Previous TSMC to flood the U.S. with 5nm manufacturing plants