Chinese manufacturer, Huawei, is currently losing more ground in the smartphone market. Its smartphone business is going down as a result of the U.S. ban. However, its other businesses are doing quite well including its MateBook lineup. According to a report from a Weibo blogger, some new MateBooks from Huawei got certified recently. The report lists the Ryzen version of the Huawei MateBook 13 and MateBook 14. With this latest certification, these devices will officially hit the market soon. 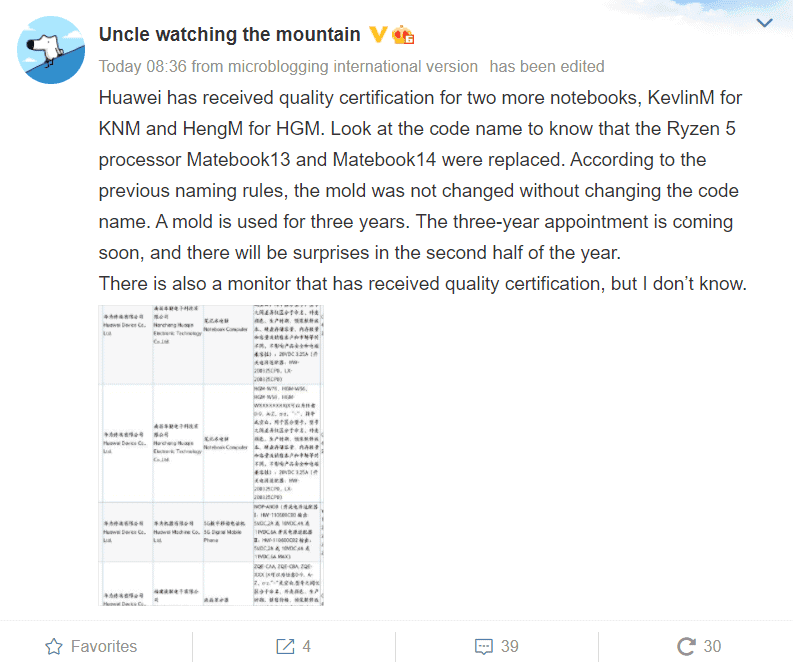 Furthermore, a Huawei monitor also got the certification. This device will arrive with the Huawei MateBook 13/14. According to the Weibo report, the MateBook digital series notebooks will launch new models in the second half of 2021. Huawei got the quality certification for two more notebooks (KevlinM for KNM and HengM for HGM).

On January 13, AMD released the Ryzen 5000U series of processors, with a maximum of R7 5800U, 8 cores and 16 threads, and an acceleration frequency of up to 4.4GHz. AMD said that AMD Ryzen 5000U series mobile processors provide a perfect combination of performance and efficiency. Compared with the previous generation, the new AMD Ryzen 7 5800U processor has improved single-thread performance by 16%, multi-thread performance by 14%, battery life up to 17.5 hours, and up to 21 hours of movie playback on a single charge.

On October 22, 2020, Huawei and DEVIALET launched a new product – the Huawei Sound, which costs 999 yuan ($154). The HUAWEI Sound speaker adopts DEVIALET’s four-speaker acoustic structure design. It comes with 4-inch woofer and 3 full-range speaker units. They are paired with 2 Push-Push symmetrical passive units to create a 360-degree surround sound effect. In terms of appearance, the Huawei Sound has almost the same appearance as the Huawei Sound X. But it is more compact and exquisite.

So what can make the Huawei Sound Pro really a Pro product? Well, we expect improvements in the sound quality and support for smarter features. A Chinese leakster already confirmed the product’s existence, unfortunately, he did not say anything about the features offered by the product. Neither he confirmed whether it will come as Huawei Sound Pro or Sound X2. For now, the simple Pro addition in the name is just an assumption.

Previous New Google smartphone gets a launch date - Pixel 5a?