Oppo unveiled its Oppo Reno5 series in December last year and already added multiple devices to the family. The base lineup is composed of a Reno5, Reno5 Pro and Reno5 Pro+. The latter is a flagship and has been rumored to reach the global markets for quite some time now. According to a new report, the handset will in fact reach the Middle East on March 16. The announcement has been made by Oppo Arabia and apparently, the high-tier Reno5 variant will make a debut as Oppo Reno5 Pro 5G as there is no Plus sign in the name. 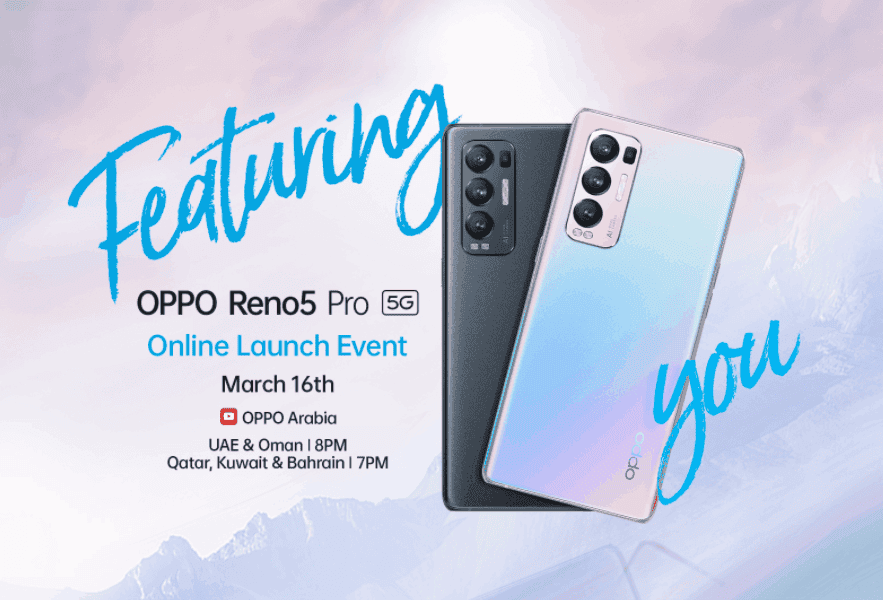 The Oppo Reno 5 Pro+ is an upgraded version and sits on the high-tier segment thanks to the Snapdragon 865 SoC. Its performance is slightly below the 2021’s Snapdragon 870 which belongs to the same family. The Oppo Reno5 Pro+ also sports the IMX766 flagship sensor customized in cooperation with Sony. It’s a 50MP camera that is aided by another powerful 16MP ultrawide angle camera. It also has a 13MP 5x optical zoom telephoto lens and a hybrid 2MP macro lens. The main camera sensor has a 1/1.56 inch outsole. The amount of light has increased by 63.8% compared to the previous generation IMX586. It supports full pixel Omni-directional focusing. The unique 2×2 pixel structure makes focusing faster and more accurate. This particular sensor also supports focus tracking for video. On the front, we have a 32MP snapper sitting on the top-left punch hole.

The Oppo Reno5 Pro+ flaunts a 6.5-inch panel with FHD+ resolution and a 90Hz refresh rate. This is a high-sensing curved display resulting in an outstanding flagship-esque look. This is an OLED panel that allows the fingerprint scanner to go inside the display. The Snapdragon 865 is paired with up to 12GB of RAM and 256GB of Internal Storage. However, we aren’t sure if the most advanced version will reach the Middle East. Other features include a massive 4,500mAh battery with a 65W super flash charge. The phone also has a VC three-dimensional liquid cooling system to prevent performance throttling.

Unfortunately, there is still no information on how much the smartphone will cost. However, the Middle East probably includes five countries – Arab Emirates, Oman, Qatar, Kuwait, and Bahrain. Hopefully, the handset will also reach other regions in the coming months. The handset will reach the Middle East officially next week on March 16.

Next What's your qualification? You may be able to work with TSMC this year