OPPO A54 4G isn’t much far away from its launch as the smartphone passed through a couple of certification websites recently. After the affirmation of NBTC, Indonesia Telecom, and TKDN certificates, the OPPO A54 4G has now passed the China Quality Certification Center (CQC) which confirms 18W fast charging support.

The Oppo A54 4G has spotted on the CQC website with the model number CPH2239. Aside from the quick charging support, the CQC posting doesn’t reveal any other specifications of the smartphone. The Oppo A54 4G model will be released in India, and according to some reports, the 5G model will be unveiled only in Japan. 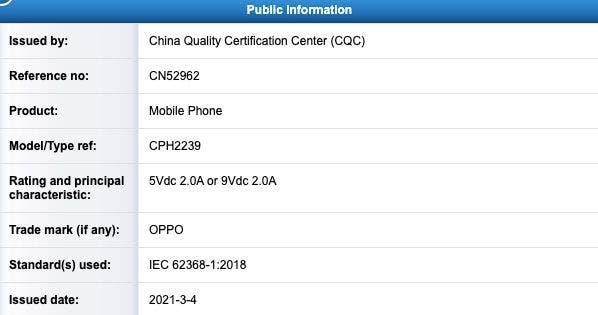 Talking few words about the NBTC certification, the listing reveals the model number, device name, and Cellular connectivity details. Besides these, there’s no more information available in the listing. In TKDN listing indicates the smartphone’s model number and Specifications. The specs include GSM: 900/1800/1900MHz, WCDMA: B1/3/5/8, FDD-LTE: Bands 40. The listing doesn’t reveal any other features apart from the connectivity options.

Last but not least, On February 24, the smartphone has crossed Indonesia’s Telecom certification website carrying a model code CPH2239.

Oppo A54 5G may carry a 6.5-inch FHD+ LCD display. The smartphone is expected to be backed by a 5,000 mAh battery with an 18W fast charging. Under the hood, the smartphone may be powered by a Snapdragon 480 Chipset. The device might come with a quad rear camera that assembles with a 48MP primary camera, an 8MP wide-angle lens, and other two 2MP sensors. At the front, the device may feature a 16MP camera for selfies and video calling.

OPPO A54 5G is expected to come with 4 GB of RAM and 64 GB of built-in storage along with a microSD card slot for additional storage. All the other details are still unknown, we expected some more leaks before the official launch of Oppo A54 5G.