The Meizu 18 series is one of the most accepted smartphones in China. This was revealed in a recent survey carried out by AnTuTu. The company has not been very active in the smartphone market. However, with the release of the Meizu 18 series, the Chinese manufacturer seems to be doing a lot. 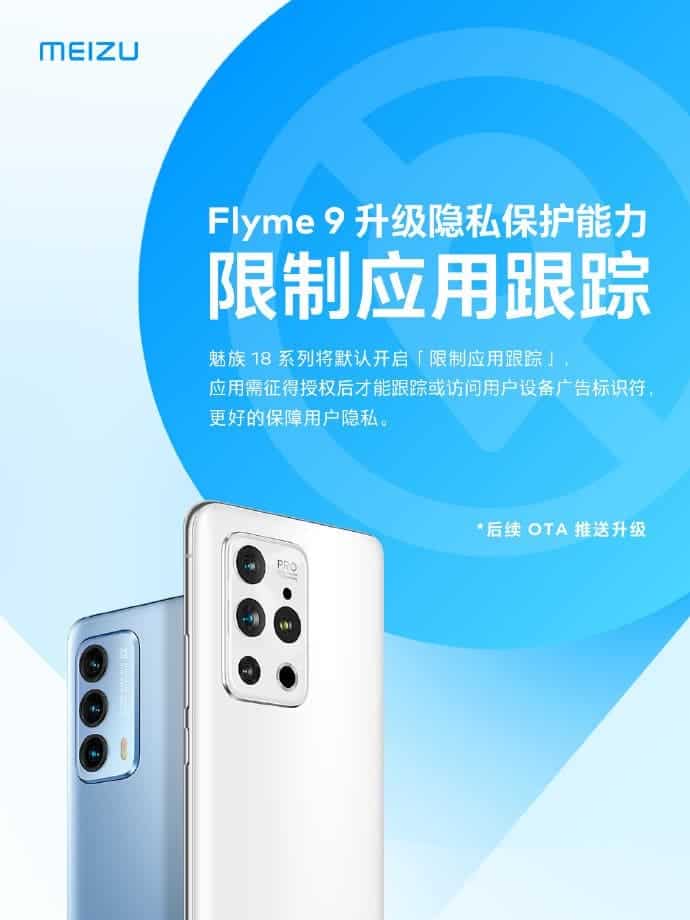 Today, Meizu Technology announced that it has further improved the Flyme 9 privacy protection. This new improvement ensures that the system (Flyme 9) stops apps from collecting users’ data without authorization. The Meizu 18 series will turn on “Restricted App Tracking” by default. However, this feature will be on by default only after the OTA update from the company is available. Nevertheless, the company did not state when the OTA upgrade will arrive.

According to Meizu, it is the first Android OEM to enable the “Restricted App Tracking” function by default. The company says that this is not an easy decision to make but a necessary one. Meizu hopes to return the privacy right to users. The company believes that every user deserves to know what app is collecting their data.

Applications need to be authorized before they can track or access user device advertising identifiers to better protect user privacy.

User data tracking has been an issue

Recently, a privacy expert called for an investigation of Google, claiming that it tracked Android users without permission. The working principle of Google’s ad code is similar to Apple’s “Advertiser Identification Code” (IDFA), which allows Google to track users on different websites and serve ads based on their browsing history.

The idea of user data tracking is very important to internet companies. The likes of Facebook heavily rely on user data tracking for targeted advertisement. Apple recently said that its new policy will ensure that users give their permission before internet giants like Facebook can get their data. For this reason, both Apple and Facebook have been at loggerheads.

In fact, in a recent podcast, Apple’s CEO, Tim Cook, claims that the social network space needs diversification. He claims that we need more social networks to break down the dominance of some companies. Although he did not specifically mention Facebook, we all know he was referring to Facebook.

In all honesty, both Apple and Facebook are dominant in their respective domains. However,  internet companies will not like the “Restricted App Tracking” feature.