Samsung has been working hard to revolutionize its smartphone lineups. We can say the company succeeded in the mid-range department with the arrival of the Galaxy A and M-series. All devices in these lineups come with affordable pricing and decent specifications for the range that they target. Last year, the company added one more lineup to its range of mid-range smartphones with the arrival of the Samsung Galaxy F-series. The new lineup is slowly growing in the number of smartphones available. According to recent leaks, the Korean firm is about to introduce a new Samsung Galaxy F52 5G in India.

The Galaxy F52 already appeared in a couple of leaks. Today, it is marking a presence in the Google Play Console listing. Although the certification isn’t the most revealing in terms of specifications, it still has key specs. Thanks to it, we know what to expect from the upcoming handset.

The Galaxy F52 5G bears the SM-E5260 model number and carries the Qualcomm Snapdragon 750G chipset paired with 8GB of RAM. This chip is already available in a multitude of other Samsung smartphones. Namely, the Galaxy A42 / M42 already comes with this chipset as well as the Galaxy A52 5G. For general performance, the Snapdragon 750G has an octa-core Kryo 570 processor clocked at 2.2 GHz that delivers 20% more performance than the S730G processor. With such a generous amount of RAM, Galaxy F52 5G users will enjoy intense multi-tasking.

The handset has a display with 2,009 x 1,080 resolution which is a little bit strange. We assume that this is a mistake since nowadays the FHD+ resolution on mid-range phones stands at 2,400 x 1,080 pixels. The device has a punch-hole cutout in the right corner of the screen which is not a common placement for Samsung devices. 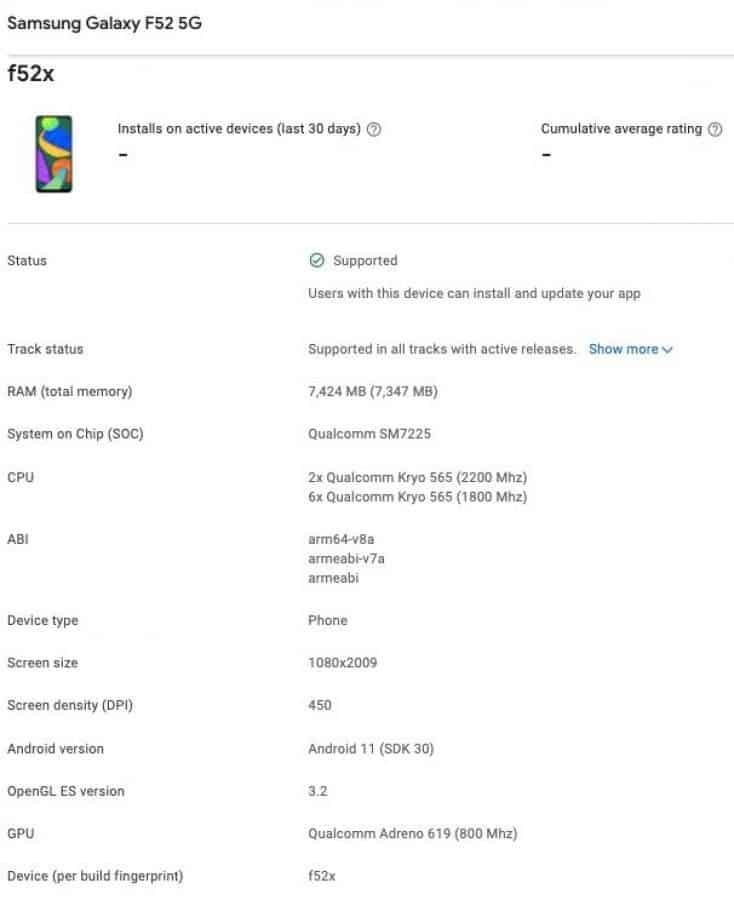 Thanks to previous listings, we already know that the handset will sport a 64MP primary camera around the back. We don’t know exactly the amount of cameras behind, but it should have at least an ultrawide module and a macro camera. The handset will draw its powers from a 4,350mAh battery with 25W fast-charging. The handset’s dimensions are 164.63mm×76.3mm×8.7mm.

There still no word on release from Samsung. But we assume that the company will hold a launch in the upcoming weeks. Worth noting that the brand also has a budget handset dubbed Galaxy A22 5G in India, which will be the company’s cheapest 5G device in India.