Realme is celebrating its three-year anniversary today. Yes! It’s been three years since the company forayed into the smartphone segment. Since then, the Chinese smartphone maker has managed to build a name for itself in the aggressive Indian market. Not only that, but the company has also diversified itself by offering a variety of products. The brand now offers smart televisions, TWS earbuds, and a plethora of IoT-based products. Well, the company is all set to disrupt its portfolio as it is now planning to put its foot in the laptop business.

Realme laptop appears to be in development, could launch in Q3 2021

Earlier this year, we started hearing about a possible Realme laptop that the company could launch down the road. Furthermore, the brand hinted at the same in a form of an April Fools’ Day joke last month. It looks like the company is indeed working on its first laptop for the masses. Realme recently published a questionnaire that asks various questions. The questionnaire consists of some notebook-related questions. In fact, the official community post also mentions ‘Laptop preferences’. 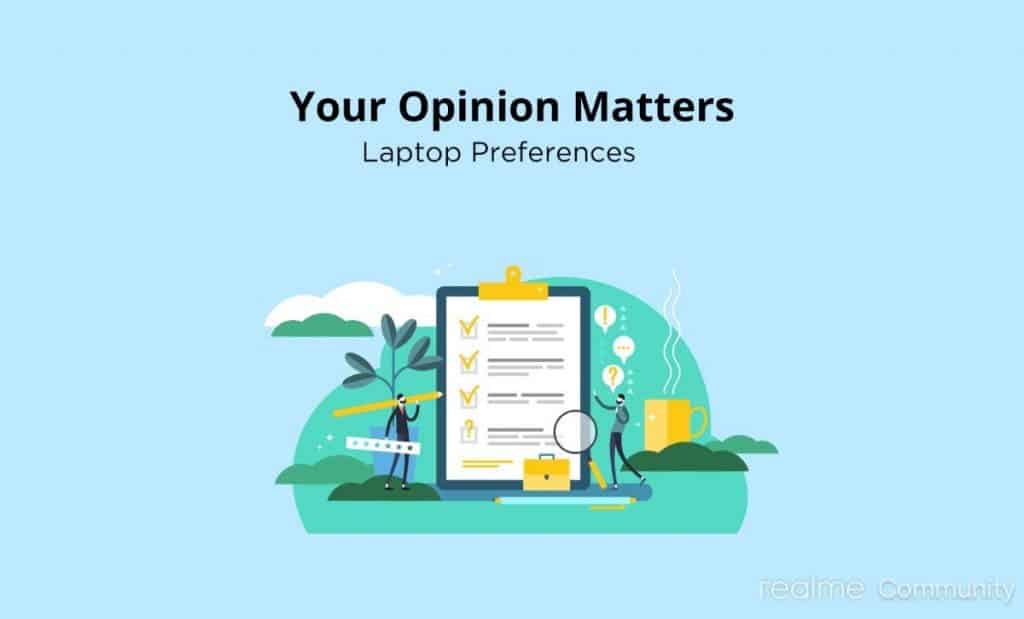 The questionnaire asks users whether they are planning to buy a new laptop in the next three months. It also asks how much you are willing to spend for the same between INR 30,000 and INR 50,000. For those who already own laptops, the company also asks the brand name.

All of these are a clear hint towards a possible Realme laptop. There’s a solid chance that the notebook is currently in the development stages. Considering the questionnaire, the laptop should fall between the given price range.  With that said, the company hasn’t really officially talked about its plan to launch laptops. If it is really working on one, then we should expect it to see later this year. Of course, it’s when everything goes well. As expected, the Indian market could be the first one to enjoy the company’s notebook.

to compete with the likes of Realme and Honor!

Realme is not the first smartphone company to put its foot in the laptop space. In India, Xiaomi and Honor are already selling their laptops. Realme’s offering would definitely compete with the likes of them. Apart from this, there are still older leaders in the market that consumer tends to rely on. Considering all these, Realme should expect to face some stiff competition whenever it enters the space.