Information about the new product, in particular, appeared in the Google Play Console database. We are talking about the use of the MediaTek MT633 processor, which we also know as the Dimensity 700. The chip contains eight computing cores with a frequency of up to 2.2 GHz, an ARM Mali-G57 MC2 graphics accelerator and a 5G modem.

The device will receive a Full HD + display and 4 GB of RAM. It will ship with Android 11, augmented by the OneUI user interface.

The single front camera will be located in a small notch at the top of the screen. The rear camera will receive a three-piece design with a 48-megapixel main sensor.

Apparently, the official presentation of the smartphone will take place in the very near future. Internet resources specify that the model will be available in various markets, including the European one. 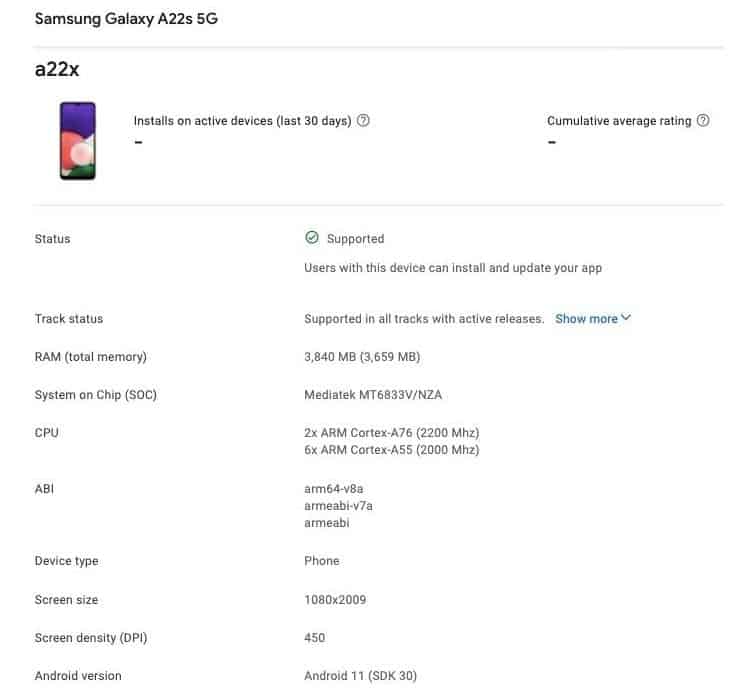 The Samsung Galaxy A series of mid-range devices has fallen victim to the global chip crisis. As it turned out, the company will postpone the release of the new Galaxy A52 5G and Galaxy A72 in key markets due to a lack of chips.

According to some Korean reports, Samsung is having problems purchasing processors from Qualcomm. In particular, we are talking about 8-nanometer mid-budget Snapdragon 720G and Snapdragon 750G. Without regular shipments of the aforementioned chips, the company will not be able to provide a steady influx of devices.

The lack of processors came as no surprise to Samsung. The company previously reported a possible shortage of chips. However, the lack of components for mid-range devices is particularly bad news, as the manufacturer had previously argued that the Galaxy A series was particularly promising.

According to Dell and Intel executives, the global semiconductor shortage will last for several years. More precise terms for resolving the crisis have not yet been named.

Next Bitcoin price plunged - drops more than 14% in 24 hours