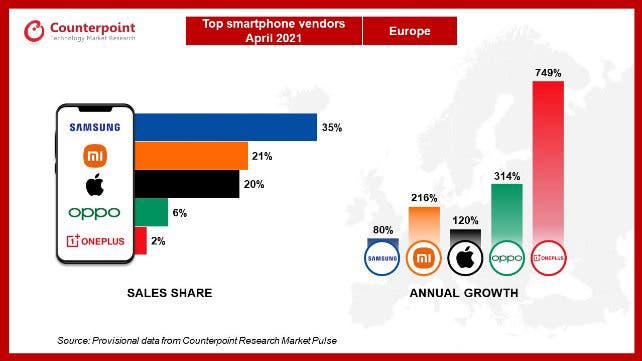 After a very difficult 2020, smartphone manufacturers and the European market is beginning to rebound. There is an improving COVID-19 outlook relative to this time last year. In  Q1 2021, European smartphone sales grow by 6% which is a good sign. However, ongoing COVID-19 challenges across the region mean the market is still down slightly on 2019 levels.

Samsung will be very pleased with the performance of its new Galaxy S21 series. After strong sales in Europe in the first quarter of 2021, it started the second quarter quite well. Specifically, the Galaxy S21 Ultra is a point of attraction for many European users. However, older mid-range smartphones like the Samsung Galaxy A50 and Galaxy A20 also had a significant impact.

The market was also helped by new device launches from most major vendors, who continue to fight for market share vacated by Huawei. Samsung was the main winner, having regained the top spot from Apple (although Apple is still the clear leader in France, Germany, and the UK).

In 2020, about 1.35 billion mobile phones were sold, with Samsung dominating yearly sales at over 253 million units sold, taking up 18.8% market share. With its current performance in Europe, the company is set to claim more market share this year.

Xiaomi appears to be the biggest winner following the “exit” of Huawei from the global scene. Generally, Xiaomi is not a flagship brand and it focuses on bringing flagship features for mid-range prices. This is one of its strategies and it is really working out for the company. Presently, Xiaomi has a very firm grip on the Indian smartphone market. Not even Samsung or Apple has been able to take its top spot in India for over two years.

Because Xiaomi did not focus on established markets like China and U.S.A, it had enough resources to focus on many emerging markets in Europe. This plan is eventually paying off as Xiaomi is now climbing the ladder in Europe. Xiaomi’s performance is particularly impressive in Southern Europe. In March, Xiaomi overtook Samsung to become the largest smartphone vendor in Spain, and it grabbed the number two spot in Italy at the expense of Apple. Xiaomi now accounts for a fifth of smartphone sales in Europe, almost triple its market share 18 months ago. Xiaomi’s huge performance in Europe is a result of its good sales in countries like Spain, Italy, and Russia

Just like India, Xiaomi uses its mid-range (or pseudo flagship) products to invade the European smartphone market. It tries not to overlap its pricing with the likes of Apple and Samsung. This way, users have the impression that they save more when they patronize Xiaomi. Also, the company has been expanding physically to many European countries. This strategy has also worked positively for the Chinese manufacturer.

In terms of year-on-year increase, Xiaomi recorded a 216% increase relative to the same period of last year. As of April last year, we were at the heart of the COVID-19 pandemic. Thus, smartphone sales were really low.

Apple may be leading the global smartphone market, but its sales are not so high in Europe. Nevertheless, the company ranks high in the third position with a year-on-year increase of 120%. The iPhone 12 series has been a sensation since Apple released these devices back in October last year. The iPhone 12 and iPhone 12 Pro have posted good sales. Interestingly, many buyers are still interested in the 4G iPhone 11 Pro and 11 Pro Max in Europe.

Oppo is another beneficiary of Huawei’s “exit” from the European market. Please note that Huawei is not completely out of the European market. However, the company lost a lot of ground after the ban by the U.S. Interestingly, most of the Huawei shares are being grabbed by other Chinese manufacturers. Oppo’s part in this reflects in its massive 314% year-on-year increase in sales. The Chinese manufacturer is one of the biggest beneficiaries in terms of year-on-year increase.

In the first quarter of the year, Oppo clocked record shipments and revenues and its FIND and Reno series played a huge part. OPPO recorded an all-time high global market share globally. Its market share is also increasing in markets like China, Europe, Latin America, and South Asia. Obviously, it is filling the vacuum that Huawei is leaving behind.