On the website of the Bluetooth Special Interest Group (SIG), information has appeared about a Samsung smartphone with the code designation SM-E225F_DS. This device will enter the commercial market under the name Galaxy F22, expanding the range of available models.

In the base of the certification department, the smartphone is mentioned among the various variants of the Galaxy A22. This means that the devices will become either the closest relatives, or even identical smartphones.

Thus, observers conclude that the Galaxy F22 will receive a 6.4-inch Super AMOLED HD + display with a resolution of 1600 × 720 pixels. The front 13-megapixel camera will be located in a small screen cutout.

Other proposed specs are as follows. A Helio G80 processor developed by MediaTek, 4 GB of RAM, a 64 GB flash drive, a USB Type-C port, a 3.5 mm headphone jack and a 5000 mAh battery with a 15-watt charge. Bluetooth SIG certification means the Galaxy F22 will be unveiled soon. 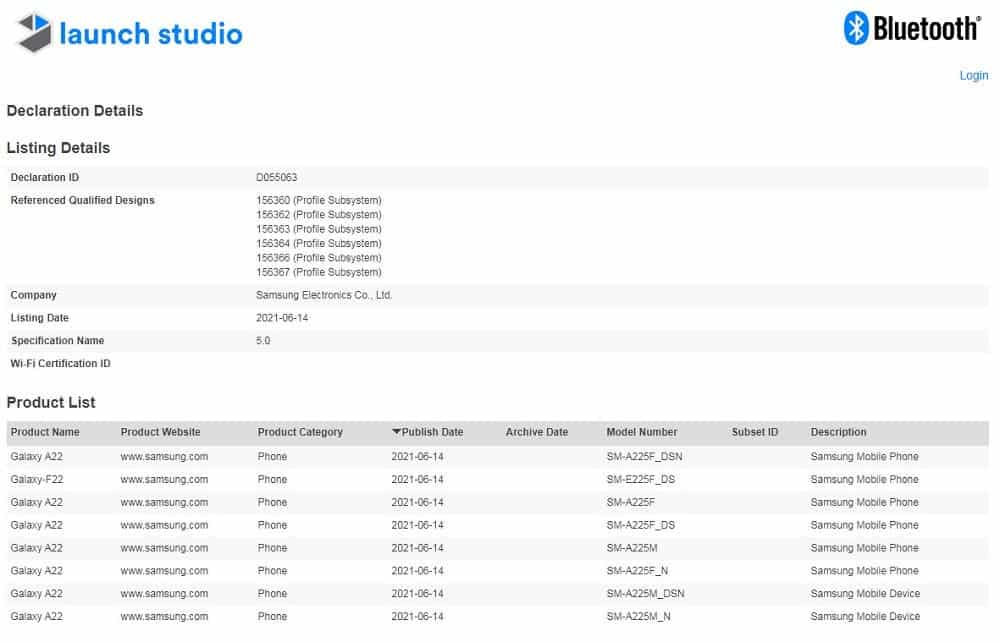 Here is a reminder of the specifications of the Galaxy A22 smartphone.

Alongside the Galaxy A22 4G edition, Samsung also unveiled its most affordable 5G smartphone, the Galaxy A22 5G; which boasts a good screen and a fairly large battery. Surprisingly, the Galaxy A22 5G smartphone received a more advanced screen than the Galaxy A32 5G – the new product offers users a 6.6-inch AMOLED panel with Full HD + resolution and a refresh rate of 90 Hz. The hardware platform is the MediaTek Dimensity 700 chipset with a clock frequency of 2.2 GHz, alongside a 4 GB or 8 GB of RAM. The storage capacity can be 64 or 128 GB.