As usual, before the official launch of any device, there are multiple leaks and speculations. However, before the official launch of the Xiaomi Mi 10 Ultra, we had a complete unboxing video of this device. The publisher of the leak (@Beautiful科技官微) recently issued an apology letter to Xiaomi for the leak on August 11, 2020. The blogger/publisher acknowledges that the leak is a violation of the confidentiality agreement which it has with Xiaomi. 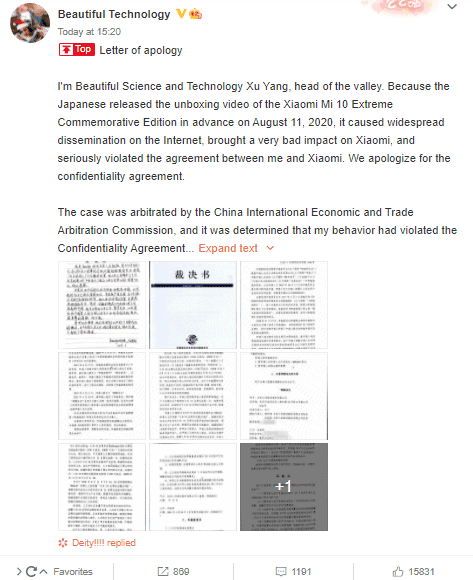 In the letter of apology, Gu Xuyang, head of the publishing house adds “This case was arbitrated by the China International Economic and Trade Arbitration Commission, and it was determined that my actions had violated the confidentiality agreement and caused serious consequences. Xiaomi should be compensated reasonably. I accept the arbitration. As a result, I am willing to take the corresponding responsibility. At the same time, because of the harm that my breach of contract caused to Xiaomi, I would like to extend my sincere sincere thanks to Xiaomi, Mr. Lei Jun, and the employees of Xiaomi who have given me great trust and all Mi Fans. I apologize, sorry.”

According to the apology letter, the blogger will have to pay Xiaomi 1 million yuan ($155,000). The payment of this fund must be within 30 days of the verdict. Also, the court rules that they must also issue a public apology to Xiaomi for the mishap.

However, it appears that the situation was not entirely intentional. The head of the publishing house left his computer at home and his mother did the posting. She said “…I saw this thing on my son’s computer. I don’t know where he was going to post, I posted it in that group. It was accidental.” She also said that she shared a computer with her son and accidentally posted the video to the QQ group that pays attention to digital technology. She also claims that she didn’t know that her son has a non-disclosure agreement with Xiaomi.

Of course, they had to delete the video but it was way too late. The internet does not waste any time to screenshot or download videos.

Previous Here are the first details of the 2022 iPhone series

Next Redmi smartphone with an under-screen camera is coming