Samsung is gearing up for the launch of the new F-series smartphone, the Galaxy F42. The Korean firm has revolutionized its mid-range business with the release of the Galaxy A and M-series. The company then launched a new lineup of F-series smartphones. The devices in this lineup are usually camera-focused or meant for younger audiences. They aren’t appealing as the M-series or A-series smartphones, especially because Samsung does not bring devices for this lineup very often. The availability of Galaxy F smartphones is also limited to certain markets. That said, the company is preparing another timely Galaxy F release. The company is gearing up to introduce a new device with Galaxy F42 5G moniker. Apparently, it will be anything but a new smartphone.

The alleged Samsung Galaxy F42 5G has passed by the Geekbench website ahead of the launch. The device is listed on the Geekbench benchmark with the model number SM-E426B. The device packs a MediaTek Dimensity 700 SoC under the hood. The variant that appears on GeekBench has 6 GB of RAM. Moreover, the device runs Android 11 straight out of the box which means that One UI 3.0 will be running on the top. The device scores 559 in the single-core tests and 1,719 in the multi-core department. 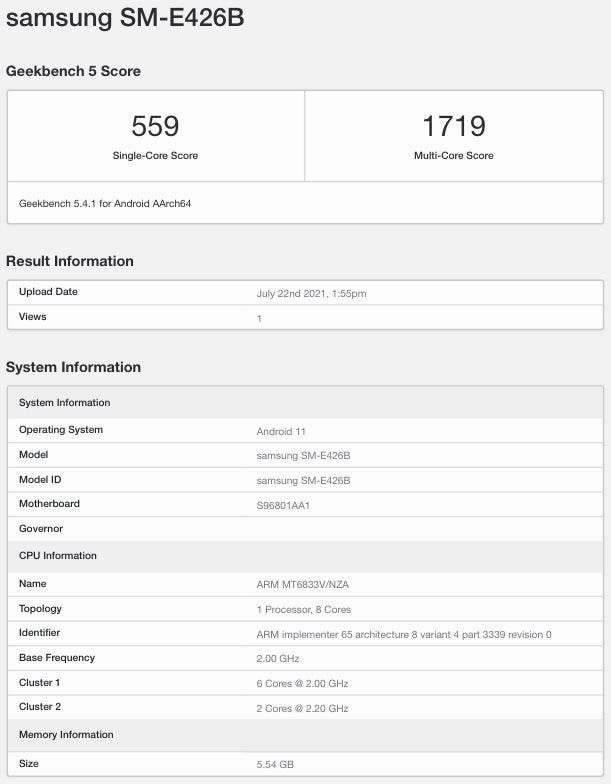 Samsung is yet to give additional details about this smartphone. However, it may land in India very soon as a device with similar specifications passed through Bluetooth SIG and Bureau of Indian Standards (BIS) websites. For now, we are curious to see if the company will reveal the smartphone as Galaxy A22 or Galaxy F42 in India.

Since the Galaxy F42 5G is just a rebranded A22 5G, we know most of its specifications. The device will feature a 6.6-inch IPS Full HD+ LCD screen with a standard 60 Hz refresh. The phone also draws powers from a 5,000mAh battery with modest 15W charging. In terms of optics, the smartphone comes with a triple camera setup. However, only the primary camera is truly capable. The first module is a 48 MP camera, the second is an ultrawide unit but it’s too limited with just 5 MP resolution. The third and final sensor is a 2 MP depth sensor. For selfies, the smartphone will pack an 8 MP front-facing camera.

We expect the company to bring some teasers in the coming days to confirm the Galaxy F42 5G existence and possible availability.

Previous Micromax IN 2B specifications leaked ahead of July 30