Last year, Oppo has taken a very controversial route with its Oppo Reno4 series. The company introduced in China 5G variants, however, for global markets, it brought 4G versions with less capable chipsets. Now, we’re in the Oppo Reno6 generation and, apparently, Oppo is changing certain policies. The company brought the Reno6 5G and Reno6 Pro 5G in India one week ago, and these devices bring no differentiation. Today, the Oppo Reno6 5G is available for sale and becomes the first Dimensity 900-powered smartphone in India.

The new smartphone packs 8 GB of RAM and 128 GB of Internal Storage. It’s available in India with a price tag of INR 29,990 ($405) which is very good considering the overall specifications. There are two available colorways – Aurora and Stellar Black.

The Oppo Reno6 flaunts a gorgeous 6.43-inch AMOLED screen with a Full HD+ resolution and 90 Hz of refresh rate. Due to the AMOLED nature of this display, the fingerprint goes inside of the panel. The panel has a top-left aligned punch hole that serves as a home for the 32 MP selfie snapper. Moving around to the back, the device comes with a Quad-Camera setup. It comprises a primary 64 MP shooter, an 8 MP ultrawide module, and 2 MP macro units. 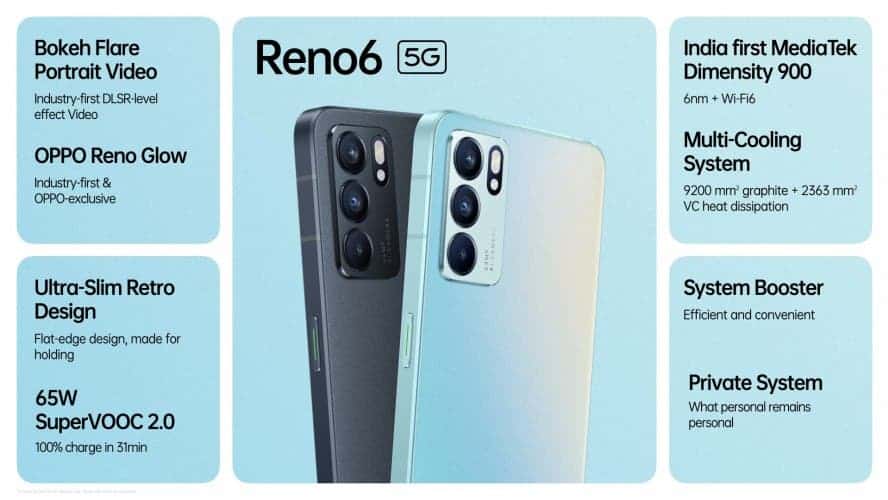 In addition to the chipset, we have 8 GB of RAM and 128 GB of Internal Storage. Unfortunately, this amount can’t be expanded due to the lack of microSD support. However, you can expand the RAM thanks to the Extended RAM features that debuted with the Reno6 series. The Reno6 5G draws powers from a 4,300 mAh battery that charges via a USB-C port at up to 65 W Super VOOC fast-charging.

On the software front, Oppo brings Android 11 with ColorOS 11 on top. The device is certainly one of the most exciting devices in the mid-range department, and we are curious to see how it will perform in the Indian market.

Next Apple sends legal notice to Chinese leaker, asks him to reveal his sources