Sony has announced today the first software beta program for the PS5. The new console will get a new software beta for select users in the US, Canada, Japan, UK, Germany, and France. The highlight of this beta is the M.2 SSD expansion support. This is one of the most requested features since the PlayStation 5 launch in November last year. After all, the console came with a limited 825 GB SSD and less than 700 GB was available for storing games and other files. Although Sony’s custom SSD is super fast, we need to say that nowadays, 700 GB isn’t much for mainstream titles. A game like the COD Warzone can easily fill that space if you download everything. Now, the long-awaited expansion is walking to users. The downside is that it won’t be cheap.

The software beta is set to roll out today, and players with an M.2 SSD device, who also happens to be PS5 beta users, can upgrade the storage capacity of their console. Both the Digital Edition and the Standard PS5 will receive the beta. Sony has also recommended that users verify receiving a beta invitation before purchasing a brand-new M.2 SSD. The new software requires full-advantage of high-speed Gen4 M.2 SSD and use it to download, copy, and launch PS5 and PS4 games. Worth noting that for PS4 games, users can also plug a portable HD, but will have to deal with the limitations of HDD loading speeds.

As we mentioned above, there is a small catch for expanding your PS5 memory. Although it is a simple task, getting a compatible SSD is very expensive depending on your region. Sony requires a sequential read speed of 5,500 MB/s or faster with a capacity of 250 GB to 4 TB. In addition, Sony notes that using an M.2 SSD with your PS5 console requires effective heat dissipation with a cooling structure, such as a heatsink. Sony goes into great detail regarding the specific requirements for the M.2 SSD. This is very positive for players who like to tinker with their consoles and possibly expand their capabilities – and more storage seems to be something that the PS5 fanbase had been asking for. 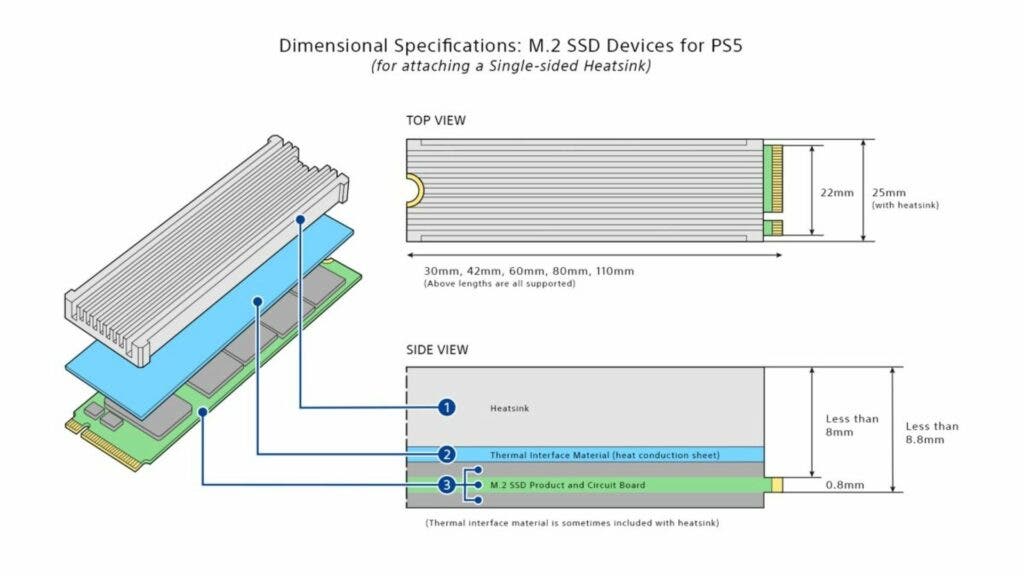 Along with the M.2 SSD support, the beta also brings several UX enhancements such as 3D audio support for built-in TV speakers. Players can enable this option from the console’s settings. Plus, the Control Center interface will bring some personalization goodness. Since the update is a beta, it will still require the user’s feedback before proceeding into the stable channel. However, we can expect the long-awaited feature to finally reach consoles in the next month.