Xiaomi has officially confirmed that it will unveil the Xiaomi Mi MIX 4 on August 10th. Considering that this will be the first MIX series smartphone in three years, there is so much anticipation. The display, camera, and overall design of this device should make an impression. Xiaomi’s CEO, Lei Jun, has been warming up the Xiaomi Mi MIX 4. According to him, the “Xiaomi Mi MIX 4 will never disappoint anyone’s expectation”. As the most high-end product line of Xiaomi, the MIX series carries Xiaomi’s vision of future technology.

In 2016, the Mi MIX generation came out amazingly, creating a full-screen era. Wang Hua from the Public Relations Department of Xiaomi Group pointed out that after the word “full screen” appeared in October 2016, the entire industry has been exploring how to make the screen-to-body ratio more extreme. 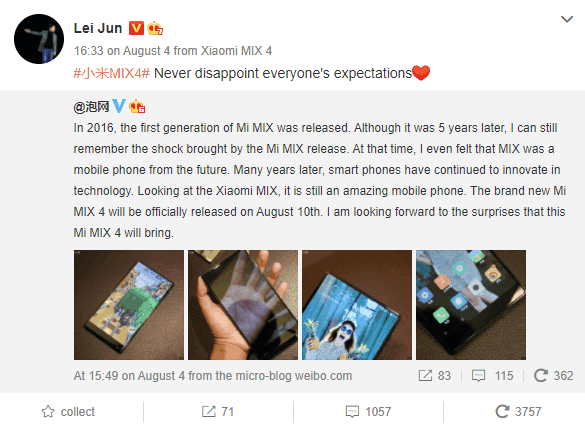 It has been nearly 5 years since the release of the first MIX generation. However, its latest MIX series will soon meet with customers. According to Xiaomi officials, the “Mi MIX series is a product born for dreams”. There is a lot of effort from the engineer. It takes the engineer’s idea of science and technology and the designer’s persistence to aesthetics. This smartphone will also carry the imagination of thousands of Mi fans for the future.

The Xiaomi Mi MIX 4 comes with a premium flexible display. This smartphone will be the first Xiaomi device to come with an under-display camera. In addition to the excellent display, the MIX 4 also brings other qualities. This smartphone uses flexible CUP technology, is holeless, 100% full-screen, and has a full-pixel display accuracy. However, it is important to note that for the “full screen” to be achieved, it sacrifices the ultimate performance of selfie picture quality.

In the smartphone market today, there are many smartphones that claim to be full-screen devices. However, these devices have a part of the screen which is hindered by one sensor or the other. This will not be the case with the upcoming Xiaomi Mi MIX 4.