Several months have passed since the launch of the Vivo X70 series, and an entire year has passed since the launch of the Vivo X50 series. The company has established a six to seven months gap between new X-series smartphones. Based on this, Vivo is gearing up to unveil its Vivo X70 series pretty soon. As per the reports, there will be three smartphones – Vivo X70, X70 Pro, and Vivo X70 Pro+. We have been seeing leaks about these devices over the past few weeks. Recently, the Vivo X70 Pro has been spotted by the Geekbench benchmark and now has paid a visit to the Bluetooth SIG and IMDA certifications. These hint at an imminent launch for the new flagship series.

According to the details revealed by the Bluetooth SIG certification, the Vivo X70 Pro carries the model number is V2015. The device offers Bluetooth 5.2 support as per the Bluetooth SIG document. Unfortunately, the certification document does not reveal much about the specifications of the handset. However, the very same smartphone appeared on GeekBench a few days ago. According to the popular benchmarking platform, the handset will run the MediaTek Dimensity 1200 SoC. 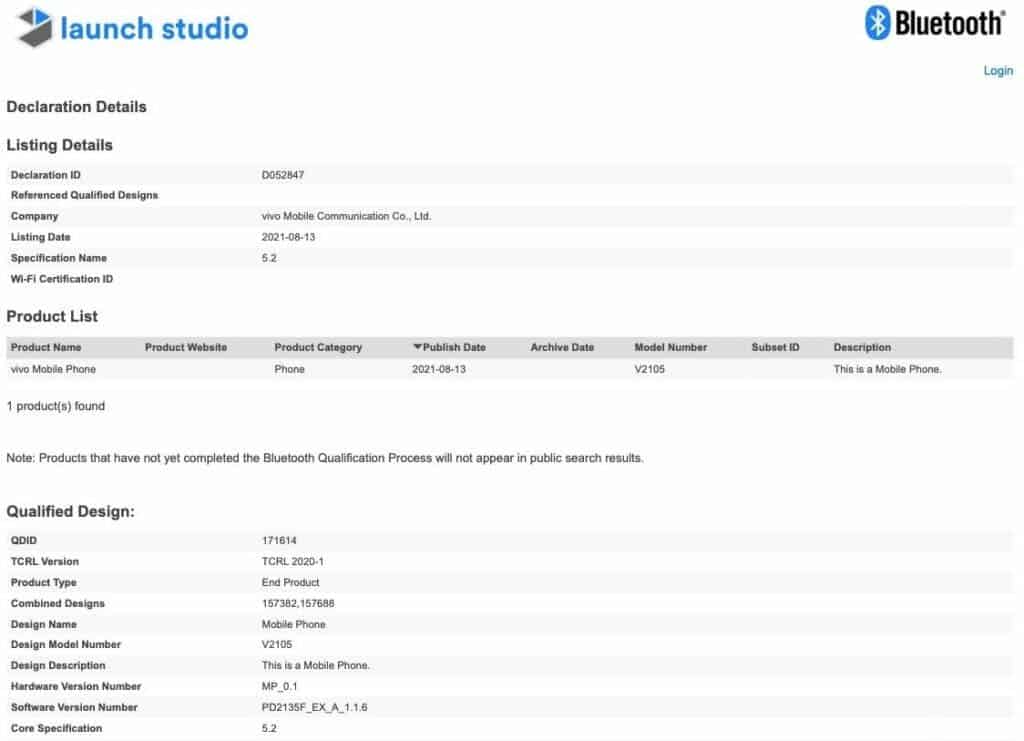 This platform has been present in a myriad of premium and flagship-killer smartphones. It packs 1 x ARM Cortex-A78 core clocked at 3 GHz, 3 x ARM Cortex-A78 cores clocked at 2.6 GHz, and 4 x ARM Cortex-A55 cores at up to 2.0 GHz. Geekbench benchmark also confirms a 12 GB RAM variant and OriginOS based Android 11. We can expect Vivo to bring the virtual RAM feature to this device. Interestingly, the vanilla will also pack the Dimensity 1200 SoC. So we expect the differences between the duo to be in other aspects of the hardware like display and cameras. Not much is known about the Vivo X70 Pro+, but we assume it’s a variant driven by the Snapdragon 888 or even the Snapdragon 888+.

Talking about IMDA certification, the listing also confirms the model number is V2105. As per the listing, the device will come with 5G capabilities (not a surprise) and will offer NFC. Other specifications such as display size, battery capacity remain a mystery for now. As far as the camera setup is concerned, Vivo is expected to keep its partnership with ZEISS for the lens. Furthermore, the company is said to be bringing its self-developed image signal processor with one of the X70 series smartphones.

The whole lineup is expected to go official around September. The company will start a teaser campaign ahead of that.