After leaks and rumors, Samsung finally revealed its new foldable smartphones through its Galaxy Unpacked event. Now that the Galaxy Z Fold3 and Galaxy Z Flip3 are now official, and the Galaxy S21 FE remains as the last flagship to be revealed by the company in 2021. For that reason, we can already start to switch our attention to the Galaxy S22 series. The next batch of Samsung flagships should make its official appearance in January 2022 and we already have info to discuss them! The reputed Samsung leakster Ice Universe brings key details and hardware specifications of the three Galaxy S22 models. According to him, the design will be a slight evolution of the current S21 series. 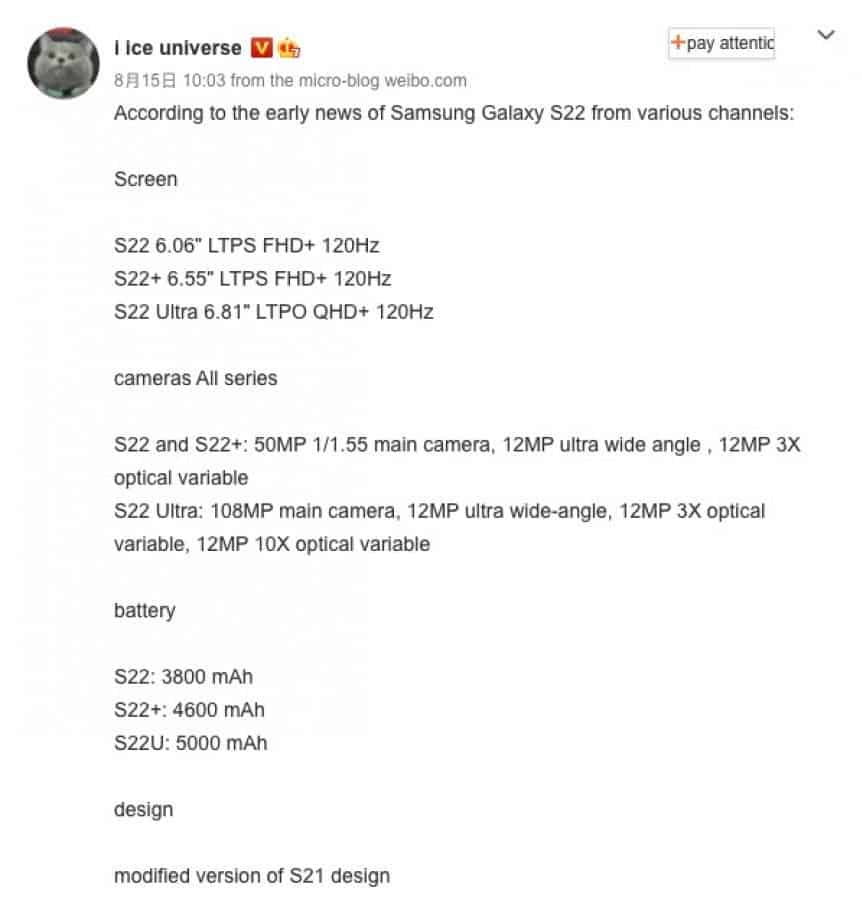 In addition to the sizes, the leakster confirms that all Galaxy S22 series smartphones will come with 120 Hz refresh rates. Due to the LTPO nature of these displays, we can assume that the software will change the refresh rate from 1Hz to 120Hz depending on the content. As for the resolution, the S22 and S22+ should stay at FHD+. The Galaxy S22 Ultra, on the other hand, will have a QHD+ resolution.

When it comes to optics, Samsung is finally changing things. The Galaxy S22 and S22+ are expected to share an all-new 50 MP 1/1.55-inch main sensor. It will come alongside a 12 MP telephoto lens with 3x optical zoom and a 12 MP ultrawide camera. The Galaxy S22 Ultra, on the other hand, will bring a 108 MP main camera alongside three 12 MP auxiliary sensors. One will be for 3x optical zoom, the other is a periscope module with 10x optical zoom, while the last module is for ultrawide shots. Unfortunately, Samsung does not seems to be interested in using its rumored 200 MP camera.

In terms of battery, some users will be disappointed. The Galaxy S22 is said to pack a small 3,800 mAh battery and the S22+ a 4,000 mAh unit. The S22 Ultra is the one getting the more capable 5,000 mAh battery. Unfortunately, there is no word on the charging speeds. But this is an aspect that we’ll be looking at, after all, Samsung is right now, behind its competitors in terms of fast charging.

While IceUniverse didn’t share details about the processors, the leakster @FrontTron shared his insights. According to the info, Samsung will stick with the Snapdragon 898 SoC for most of its Galaxy S22 devices. Apparently, the company is facing production issues and low yields of its in-house Exynos 2200 SoC with AMD mRDNA GPU.

Previous Oppo sets up a Camera Innovation Laboratory in India