A few days ago, Honor held a new product launch conference for the Honor Magic3 series. In addition to launching the Magic3 series, the company also unveiled a new tablet, Honor Tab V7 Pro. This new tablet which is a direct competitor to the Xiaomi Mi Pad 5 is now available for purchase. The starting price of this device is 2599 yuan ($401).

As a large-screen tablet device, the screen is the most critical part that affects the user experience. The Honor Tab V7 Pro comes with an 11-inch display with a screen-to-body ratio of up to 86%. The bezels of the display are quite narrow and equal on all four sides. It has a 2.5K level resolution of 2560 x 1600 and also supports an ultra-high refresh rate of 120Hz. Furthermore, this device has the TÜV Rheinland certification for safe low blue light eye protection mode. The Honor Tab V7 Pro also supports a DCI-P3 wide colour gamut with a maximum brightness of 500nit and a contrast ratio of 1500:1. 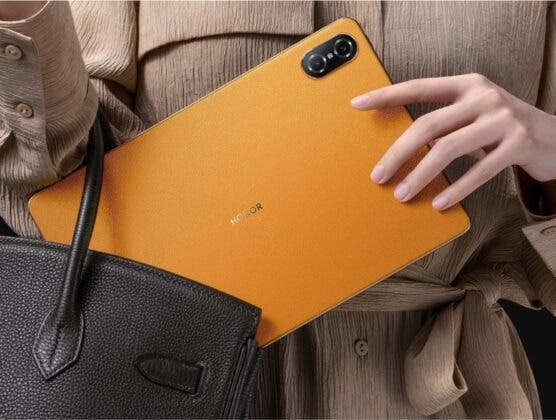 The Honor Tab V7 Pro is the first device to launch with the Kompanio 1300T 5G. This chip is a Mediatek 6nm processor. The Kompanio 1300T comes with an 8-core CPU, flagship-level A78 architecture and this increases the performance by 20% while the power consumption reduces by 8%. The chip comes with the Mali-G77 architecture 9-core GPU, this graphic card increases rendering ability by 40%.

The 6GB and 8GB of RAM in this device support memory expansion technology. The smart storage expansion technology expands the RAM of this smartphone by 2GB. This means that this device can have a maximum of 10GB of RAM. This technology works by using some part of the storage to work as RAM. Unfortunately, the Honor Tab V7 Pro has a maximum of 256GB of RAM. Thus it barely has enough storage for saving relevant documents and may not have storage to spare for RAM conversion.

In terms of battery life, the Honor Tab V7 Pro has a built-in 7250 mAh large battery. According to the company, this device has a standby time of 37 days. Also, users can use this tablet for watching videos for 15 hours. In addition, this tablet supports 22.5w fast charging and can achieve a full charge in two hours. The Honor Tab V7 pre-installs the MagicUI 5.0 system which is optimized for tablets. It has a complete multi-tasking and multi-window interactive experience to maximize the interactive efficiency of the large screen. It also supports the drag and drop of photos, text, and files. The Multi-screen Collaboration 3.0 supports a smart split-screen, computer mode, parallel vision, and other functions.

The Honor Tab V7 Pro has four models. The prices of these models are